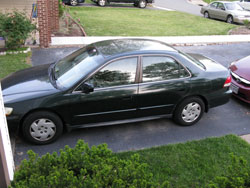 This week is the final week I'll be driving my 2001 Honda Accord on its ridiculously short commute to Reston (7 miles one way). If all goes according to plan, I'll be getting a new 2012 Accord on Friday, gracefully retiring this ugly plain-jane vehicle for good. Black-green is an awful color for a car in any circumstances, but moreso when you are red-green colorblind and the car is rendered invisible. The next car is expected to lean heavily towards primary colors, not unlike most websites I design. 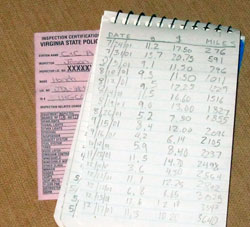 A habit I inherited from my Dad was to record the date, mileage, amount, and price of gas throughout the life of the car. This provides a historical record of how many miles per gallon you're getting, although I rarely ever used it except to determine that yes, I do drive too aggressively to be considered green. I would lose at hypermiling. On the plus side, this little blue notepad makes for an interesting Wednesday morning update!

This Accord (which Rebecca has named "Cordy" because girls name their cars and boys just drive them) was purchased by my parents in July 2001 (this is why the color is lame). I promptly drove it down to Florida State University, where it sat in the parking lot under Rob Kelley's apartment, atrophying in the salty Southern climate and used only for weekly Sunday trips to Walmart for groceries.

At the time of writing, this car has 99,200 miles, and was taken to the gas station 428 times. My dad changed the oil 24 times. In the charts below, the number on the horizontal axis is the year (so 1 is 2001). I made them in Excel, and the time it would take to figure out how to use a column full of years as the labels was longer than the expected time my dinner pizza was going to take to cook. 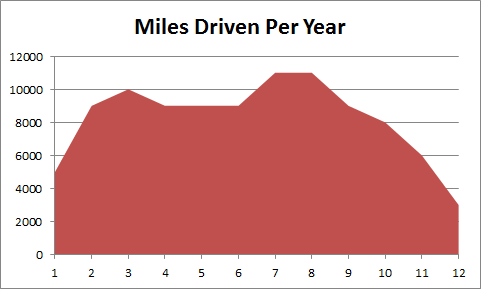 The amount I drove in a year spiked in 2003 because Florida is continents away from civilization. It also spiked in 2007 when I started dating Rebecca inside the Beltway, but promptly dropped to normal ranges once I convinced her to move in with me. Shacking up is green. 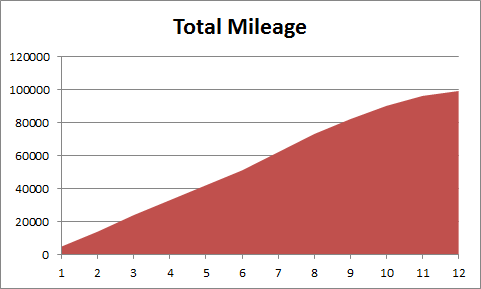 I'd better tread lightly over the next couple days, because I think my trade-in value plummets at 100k. 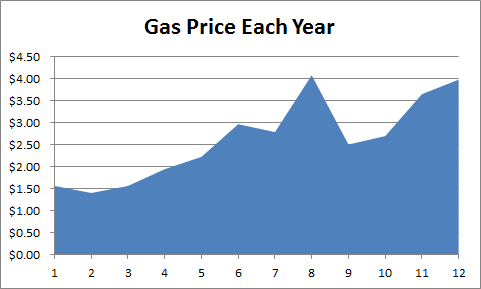 My favorite gas memories of all time (discounting methane-based memories) include the BP gas station in Salem, Virginia, near Paige's parent's house, which regularly sold unleaded gasoline during college at 79-89 cents per gallon.