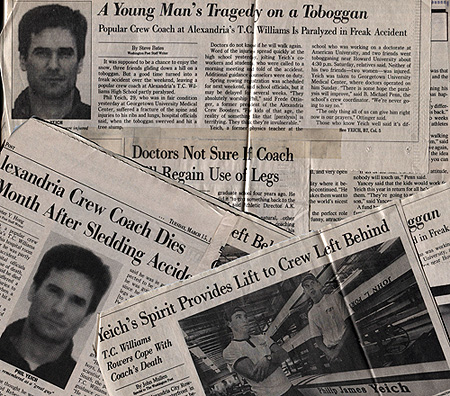 It was eighteen years ago that my freshman crew coach died from blood clot complications, a month after a freak sledding accident at the Masonic Temple. I was fourteen years old, wore glasses with lenses the size of iPads, and was a junior at TC Williams. Although my grandma had passed away a year or two earlier, this was my first awareness of a death that impacted an entire community. As I tell about it from my journals at the time, it was pretty underwhelming.

Jack called a little while ago. Coach Yeich, the one that was in the sledding accident, had a blood clot sometime today and died. He was doing better too. It's weird. I feel bad about it but somehow I'm detached from the whole thing. He was friendly with me and he was a nice guy but I never really and truly knew him. I know I should feel sad but I don't. It's odd. If there is a funeral service, I'll go to it.

After band, there was a crew meeting about Coach Yeich. A lot of people were crying. I felt kind of guilty because I didn't feel as sad as they did.

This was the coach that guided me through a tricky, early year of becoming a coxswain (which is French for "80 pounds of unfired clay responsible for ordering around 900 pounds of rowers"). The role is hard enough with confidence, but even trickier when you're just learning the ropes yourself. Coach Yeich provided the quiet trust and respect that allowed me to find myself as a coxswain, which made it all the more peculiar to me that I wasn't devastated by his death.

My feelings of guilt for not feeling bad spiraled higher in the following days, as waves of newspaper articles, support meetings, and cancelled events swelled through school and Alexandria. I would always look around at the girls crying and hanging on to each other and try to force myself to feel as sad as they were. This never really worked, and in a rare moment of teen dude bonding, I learned that others were feeling the exact same way.

That isn't to say that we were callous -- just that we had not yet had the life experience to process the situation: we knew that we were supposed to be sad, and we saw examples of the sad around us, but without that appreciation for life and death as a motivation, we were insulated from being affected. 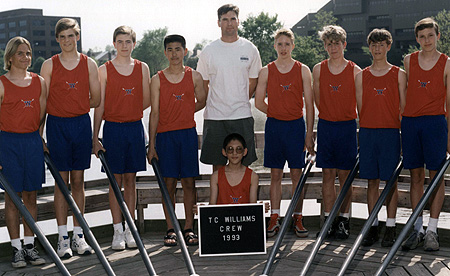 This disconnect continued on the occasion of the funeral which took place in the creatively-named New Market (because Virginia is for lovers, not poets) four days later. As six of us piled into a minivan for the two hour trip west, the mood was light and it felt like nothing more than a St. Patrick's Day field trip (and excused absence) from school. We played Tetris on old-school Game Boys and I drank too much Pepsi and had to visit a rest stop.

We finally arrived at a church in the middle of nowhere, incongruously filled with the entire population of Alexandria. As the mood grew somber and I settled into a pew, I began to anticipate that this would finally be the time when I truly felt sad. Instead, as the service began, I became progressively more annoyed.

The story of Coach Yeich and the people he affected played a minimal role in his funeral service. Instead, his life and death were mere Powerpoint slides in the briefing I informally called "How Our Church Will Get You Through This Difficult Time". Rather than sadness, I felt gypped: I had come hoping to be affected and ended up in a time-share seminar. Even as a fourteen-year-old heathen, I knew that something was off about that service.

I rarely ever thought about Coach Yeich after that year, except when browsing through all of the news clippings I've saved throughout the years for no good reason. Eventually I grew to an age where death affected me, but thankfully, I don't think I've attended a funeral for anyone under the age of 60 since then.

There is no moral to this rambling tale -- it's just one of the many memories floating around in my head that deserves to be written down before I forget it.