as the lawyers say, the hilarity is in suing 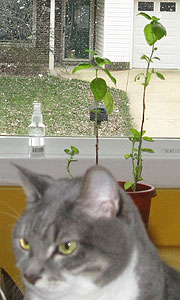 ⋄ Other than a complete lack of stickable snow, 2012 has been pretty good so far. The weather has impressed no one, least of all Booty, but at least no one I know has been stabbed, shot, or killed in a tragic blimp accident.

⋄ Unlike most years, my mental year tracker immediately rolled over to 2012, and I have yet to accidentally write 2011 on any checks or documents. However, I can only be good at a small number of things at any given time, so this is balanced out by the fact that I consistently have to think to remember whether I'm 32 or 31.

⋄ Five years ago in 2007, I was just coming to the end of a three month work cycle of 80 hour weeks working on the METADATA REGISTRY 6.0, had not yet met Rebecca, and was trying really hard to like the new Zelda game for the Wii. Today, there's slightly less work, slightly more Rebecca, and just as much Zelda ennui.

⋄ I really want to like Zelda, and I keep on playing it, but it jut feels so slow-paced. I have a feeling that of the 20 hours I've played so far, 18 has been spent watching cinematics with the subtlety of a Will Ferrell movie, and the other 2 hours have been spent waiting for the Wii to power up through 20 menu screens, calibrate the controller, and warn me not to eat it.

⋄ Plans for the weekend include some family time with Rebecca's Maryland branch, a company holiday party with a ridiculous theme (The Wild West), some overtime, and some living room bannister painting. It turns out that overbuying ridiculous amounts of WINDJAMMER BLUE has paid off, since it looks good separating our orange kitchen from our beige living room.

⋄ Have a great weekend!

Plane passengers accidentally told they are about to crash into ocean