Five years ago today, I composed a new Virginia state song, insignificantly outraged that the land of yearly car inspections had been without official music since 1998. Because of its saucy lyrics, the previous song, "Carry Me Back", was designated by the General Assembly as "state song emeritus". (For those of you who did not go to college, this means that the song has the obligation to show up at least once a week and look pretty in the brochure, but is under no obligation to actually teach anything).

There's probably a touch of favouritism involved when Virginia isn't allowed to say "old darkey", but Arkansas can have an overtly sexual song called "You Run Deep In Me" and innuendo-oozing lyrics like "mallards sailing on a December wind". Regardless, or irregardless, we have now been without a state song for 14 years -- even Maryland has one ("Oh Christmas Tree"), and it's a sad day when Maryland is better than Virginia at anything.

To rectify this situation, I would like to shine a renewed spotlight on my completely inoffensive replacement song, Hail Virginia. With enough new exposure, my hope is that this song will end up trending on Twitter and then noticed by the General Assembly. ("Trending" is when you have nothing original to share on your Twitter account so you just talk about what everyone else is talking about).

Hear it sung by the composer, formerly an accredited ear training instructor at the Florida State Department School College Dominion of Music

Hear the marching band version that the UVa Pep Band will lipsynch to, should they ever be allowed back into any sporting events 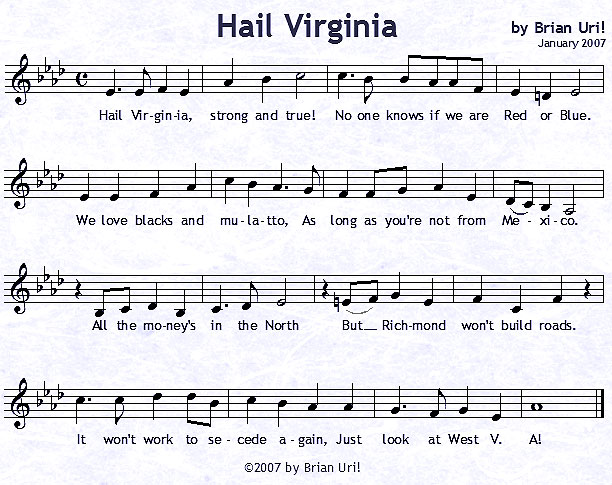 To raise awareness of this musical gem, which Wagner would have killed Mendelssohn to think of first, I am also willing to arrange it for other groups besides a marching band. Post your suggestions in the comments section and I might oblige!