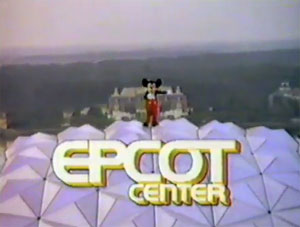 In 1988, there was a cheesy tourism ad about Epcot Center that regularly aired at all hours, but especially during the Wonderful World of Disney show on Sunday nights. The commercial ended with a zoom-out shot of Mickey Mouse waving from the very top of Epcot Center.

My sister, who was 3 years wiser at the time, once asked hypothetically, "Wouldn't it be funny if he fell?" And I, as an impressionable 8 year old, had to agree -- watching a giant anthropomorphized mouse roll off of a giant golf ball did seem pretty funny.

After the next Sunday dinner when the dishes had been washed and my parents were settling in to watch 60 Minutes, the ad came on again, and I decided to parrot my older sister's wisdom, "Wouldn't it be funny if he fell?"

Instead of agreement from my parents, I got a stern lecture about the fact that there was a real person in the mouse suit who would be seriously injured if that really happened, along with disgust that I would have such a callous outlook on his well-being.

Later that night, my sister laughed at me because I had gotten in trouble and she hadn't.

Banana at large after attacking gorilla