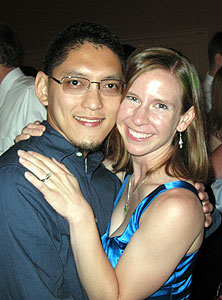 In an effort to avoid traffic, I left for Charlotte on Friday night around 8 PM, carpooling with Emily and Evil Brian. Rebecca had been tooling around on a road trip for the past few days, so it was just the three of us driving down I-81. The trip wasn't as horrendous as past trips, because I-81 has finally entered the twentieth century with a 70 MPH speed limit. I took the wheel at Exit 222, and a giant box of Sweettarts coupled with every single song the Beach Boys have ever written got us safely to the hotel at Lake Norman at exactly 2:22 AM. It was one of those extended stay places with a kitchen, and our room looked exactly like the one I stayed at in New Jersey for Kathy's wedding five years ago. 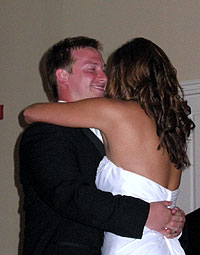 We oozed out of bed at too early an hour the next morning, solely to hit the full breakfast buffet featuring waffles and overcooked sausage patties. Afterwards, we donned our swimsuits and went to a pre-wedding party at Amanda's parents' house right on the edge of the lake. The water was unseasonably warm for swimming and noodling, most likely because of the nuclear power plant happily gurgling just out of view from our inlet, but also because of the high 90 temperatures and associated humidity.

After a short nap in the afternoon, we returned to the scene of the noodling for a rehearsal dinner, this time dressed in finery not fishery. The meal was an open bar, supported by roast beef and shrimp, and there was a dearth of mosquitoes, even those with five eyes or eleven legs. 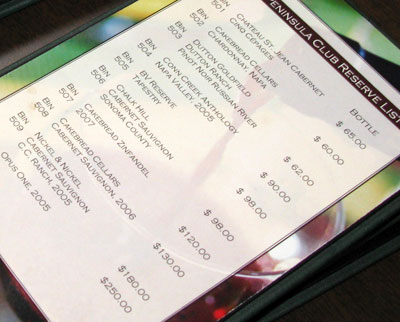 On Sunday morning, we met up with Rebecca's childhood friend, Catherine Hicks, and her boyfriend at one of the many parks dotting the lakeside. The first four rules on our parking stubs were permutations of "stay out of the water" which was a shame with the heat index almost out of bounds. We did some very mild hiking on the trails and then collapsed in a heap near the only area with a slow breeze.

In the afternoon, we just happened to bump into Jack and Kristy of Arlington fame for ice cream. Apparently everyone who's anyone has parents with a massive house on Lake Norman, and though we never find time to hang out while living 20 miles apart, we had better luck 400 miles from home.

The wedding took place at the Peninsula Club, a radioactive golf course on the east shore of the lake with a wine list more pricey than any single kidney I might sell. The wedding was outside overlooking the greens and inversely proportional in length to the humidity. 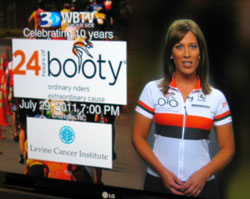 The reception was held onsite and featured a first dance to a song with lyrics written by the groom, giant hunks of rare meat paired with gumbo, a second open bar, and Rebecca's disappointment at finding the Macarena on the Do Not Play List. The after party bled back to the hotel after we learned that all of the restaurants and bars were closed on a Sunday night, and we watched an infomercial for 24 Hours of Booty to end a successful weekend.

We arrived home around 5 PM on Monday night and found the cats still alive, thanks to the assistance of our across-the-street neighbour and camel-like humps of fat.

Sexual activity tracked by FitBit shows up in Google

How abominabell could this school get?