Welcome back from your four-day weekend of drinking and easy women (or, if you spent the time on a retreat at a Bible camp full of old Southern Baptists, "wheezy hymnin' "). I actually worked on both Monday and Tuesday of this week, but to maintain my patriotic facade, I seized upon the excuse to be lazy and not update my web site -- to do any less would be to deny the Amberican way.

These past couple of weeks have found me in a mood of split focus, where I'm really not doing much at all, but I feel as if I have too many side projects going on and can't muster up the enthusiasm to bring any of them to fruition. For example, I have my master bedroom coated in masking tape ready for the walls to be painted PUFFIN BAY GREY but have not yet shown Mr. Miyagi "Paint the Fence". I've done some mockups of the DECADE EDITION of the URI! Zone, slated to be released in August, but haven't picked the improvements I'm actually going to implement. My lawn is mowed but I did not use the string trimmer on the hard to reach spots. 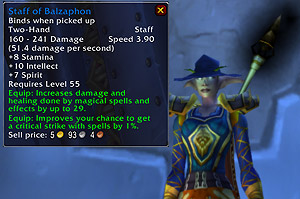 This mood hits me every few years and the only way to beat it is to completely abandon any semblance of productivity for a few days until I get bored and restless. At that point, I'll go back to overcommitting myself and return to being Super BU. So in an effort to be completely useless, I went on a two hundred mile road trip to go to a barbeque where I'm known as "Mr. Brian", watched an entire half of the first season of Veronica Mars, recommended by Kim, which is 100% shameless WB-teen-melodrama but is also a really good whodunit show with complex back stories and witty dialogue, listened to a new Cardigans CD ad nauseum, and played Warcraft until I could barely see straight. The last one netted me a nice new toy from Stratholme, the STAFF OF BAMBOOZLE, which shall aid me in my quest to ERADICATE THE HORDE and also allows me to NEEDLESSLY CAPITALIZE WORDS FOR COMIC VALUE despite the fact that it looks like a giant feather duster. And because of my new hat, everyone thinks my character is from Down Under. 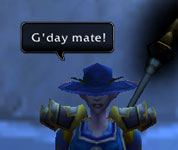 Now it's out of my system and tonight is paint-night.

Hitmen are for the birds

Can you kick it?