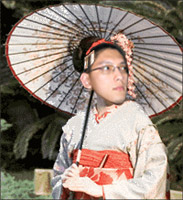 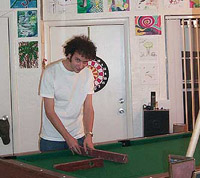 The first year of grad school was all about figuring things out -- meeting the people that would form the nucleus of the atomic hanging out group, discovering all the hidden fees that Bank of America threw onto every transaction, realizing that grad school was just like undergrad but with more free time, and chatting it up with the cute girl in the office for two weeks until she absent-mindedly scratched her nose one day revealing a wedding band (something you're just not used to looking for first when you're only 21).

After that initial phase, grad school became a blur of comfortable hang outs, painting pictures, playing pool, listening to Mike's rants about how horrible U2 are, or watching a bunch of musicians smoke up and discuss the most unimaginatively stoner-apropo topics until three in the morning. The URI! Zone by this time had become all about the daily updates, and modifications to other areas like the Music and Art sections were few and far between. I really wrote to my audience in 2002, talking mostly about music or school-related topics, with the occasional politics post thrown in. I didn't make anything too racy, because I also knew my students occasionally visited, looking for dirt on their favourite TAs. 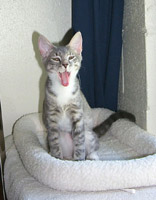 I remember wasting an hour of my life convincing Justin Barron not to drive home drunk, driving him home, and then sprinting a mile out of the ghetto at 3 AM past the homeless shelter. I remember Booty the new kitten being too much kitten for a one bedroom apartment and running in crazy circles all day long, then being so lonely that she'd pee on the carpet anytime I set foot outside my door. I remember playing Conker's Bad Fur Day with Mark on his first day of quitting smoking in an only moderately successful bid to keep him distracted. 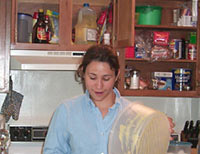 I permanently moved back to Virginia and into an apartment with former roommate Anna in the summer of 2003, which also paired up Booty and Kitty as sumo wrestling champions, and in the first few months of Virginia residence, I only updated the website sporadically. Since I was now "officially" in the real world, I kept myself busy apartment hunting, going shopping, and working on pointless projects at work that would ultimately be cancelled. Once the hubbub died down, I decided that if I was going to have a website, I was REALLY going to have a website. After a highly democratic user poll, I registered the domain name, www.urizone.net (which narrowly beat out www.uriuriuri.com and www.urizoo.net). For those of you who came late to the party, uridomain was not an option because it was already registered to a Japanese porn site. So with much fanfare, The URI! Zone officially opened on November 1, 2003 and daily updates resumed (even on the weekend!)

Follow-up on the Paper Clip Guy

Losing the election to your spouse