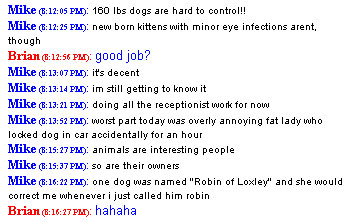 It's been quite some time since I mentioned the welfare of the kittens. Everyone can be assured that neither one has met an untimely demise from hyenas or other natural predators. Since it's the end of the month, I'll take a news post to enthrall you with status reports on the major players:

Booty is still Booty. She likes to chase Amber all over the house or wrestle Kitty to the ground for world domination. She thinks Sydney is annoying and smacks her around when she won't shut up, but will use Sydney as the fall-cat for stealing food out of cabinets or the sink. Booty is slowly becoming a lap-cat and knows two tricks, "Fetch the String" and "Run to fridge when Kitty is doing tricks".

Kitty is losing weight and spends most of her time staring out the window at chickenhawks or crying at the door to go into the hypoallergenic non-cat part of the house. She likes short walks on the beach, and can Sit, Shake, Speak, and Roll Over. She's learning Come but it currently only works when you're standing by the fridge.

Sydney is the most obnoxious yet cute kitten ever. She has a 40-year-old smoker voice and whines for food all the time. Through perseverance, she's learned how to open food tins, closed trash cans, and cabinets in her quest for food. We considered changing her name to Alley since she acts and looks like an alley cat. Sydney follows Kitty around and Kitty licks her.

Here's a video clip of Sydney entering a room:

Amber is very shy and not too bright. We considered renaming her Eldie. She will sometimes stand on both legs to reach something and then fall over sideways. She plays pretend by herself a lot, and has the tendency to get toys stuck to her claws. Amber is the lappiest of lap cats, but skitters away from anything that moves.

Here's a video clip of Amber playing with herself:

Principal has no sense of humour

Student who was "Most Likely to Assassinate Bush"