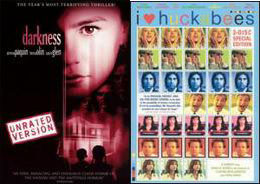 It's time for two more capsule reviews of recently rentable movies. Darkness with Lena Olin and Anna Paquin is a horror movie that's got a passable amount of "creepy", but at the expense of "scary" or even "plot". It employs a lot of standard horror devices which seem relevant but aren't, and an ending which tries to be different and generally succeeds. You won't miss anything if you miss this movie.

I Heart Huckabees is a weird movie. It's interesting, has decent performances, and is easy enough to watch, but it's not really a movie I would recommend to a friend. At times, its "deep" themes seem to be satires of satires of itself, as if the writers felt they were being clever at turning serious philosophy into a lightweight movie, but then got carried away and ended up serious themselves. Watch this movie if nothing else is on the shelf, but skip it if you hate any movie which can effectively be described as "whimsical".

A little too far into the role