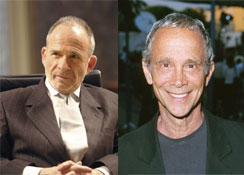 Tonight on Alias we find out more about the strange guy pretending to be Arvin Sloane in another country with his own CIA-like operation. The actor they chose for the part, Joel Gray of Cabaret, looks alarmingly like Ron Rifkin's long-lost brother. Coincidentally, Ron Rifkin also played an identical role in a production of Cabaret in his career.

Guest Room Fest 2005 is halfway done, with all the walls painted a pleasing shade of colour. What remains is to recarpet the room, put in new moldings, paint all the trim, and buy some furniture.

Have a happy 4/20. Hopefully no one shoots up any schools today, unless they're intravenous school addicts.

"Reindeer do not normally run off cliffs when they are grazing on the top of the mountain," Pavval said