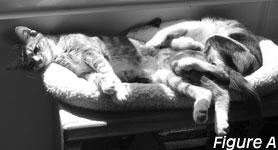 I spent all of last week sprawled on the couch in the final throes of various diseases (see Figure A for a reenactment of how I sprawled). Since I could barely sit at my computer without falling over, I missed all of last week's planned updates, which were to include: an interview with Astrid Spielman, lead singer of the punk band, The Particles, build-it-yourself instructions for a glow-in-the-dark pinata, and a new composition with the title, Where is Alex?.

To make up for this lack of updates, I've added some new cat pictures to the Photos page, and will describe my week for your reading pleasure. 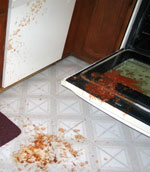 I was feeling fine last Saturday and made a roast leg of lamb for my parents, who stopped by in the evening for dinner. The lamb turned out just fine, but the recipe apparently called for me to snag the roasting pan on the oven door so the lamb could somersault through the air in an exploding miasma of tomato sauce.

On Sunday morning, I went to work for a few hours to clean up a few outstanding tasks. I felt bad almost immediately and was home by 8 o' clock with a headache and a fever. I spent the next three days with a fever in the hundreds and one of those body-convulsing coughs that reverberates through your body like the bass in Dancing Queen but doesn't seem to have any effect. 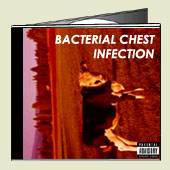 After three days of that garbage, I oozed down to the doctor on Thursday. He said I had a Bacterial Chest Infection (which is incidentally going to be the name of my first heavy metal CD, due out next year) and prescribed some antibiotics to mix with my Tussin. Evidently I never fully got over my cold from two weeks ago, and after helping Anna move a bunch of boxes out from underneath the stairs last weekend, my lungs were coated in cobwebs of sick like holiday tinsel.

Life was a lot more manageable on antibiotics. On Friday, I watched Shaun of the Dead which was funny and worth a viewing, and Closer, which was not. On Saturday, I watched Wicker Park which was also quite good, and reread the complete Chronicles of Prydain.

It's now Monday and my lungs are feeling much better, but I'm very weak and have to rest a lot. I lost five pounds since everything I ate tasted like Tussin. I'm going back to work tomorrow, so hopefully things will go back to normal.

Also, Sydney is now fighting crime as the Caped Avenger: 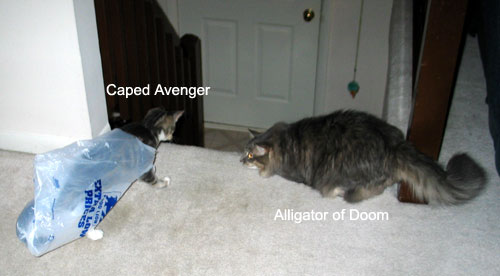 Ms. Wheelchair stripped of title for standing up

Four male models who appeared in an ad campaign against domestic violence are suing New York City, saying the posters stayed up beyond the agreed time, leading people to think they really were wife beaters.