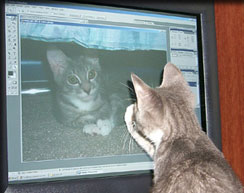 I did have an update prepared for yesterday, but the VT Music Department was in the process of changing their server configurations. This site is now located at /alumni/llamaboy/ rather than /students/llamaboy/ -- Make sure you update your bookmarks, so you don't miss out on any of the inanity. There will be a redirecting page at the old site for the next year.

I adopted a kitten yesterday at one of the weekly Petsmart fairs. It's a three-month-old grey Siamese mix that doesn't yet have a permanent name. It's already reached its daily cuteness quota, so I've put up some fresh pictures on the Photos page. There was a brief scaredy cat period where it crawled under the baseboard of the cupboards and wouldn't come out, but it seems to have adjusted fine now. Last night, it fell asleep on Mike's stomach during video games.

They're reshowing the Super Bowl episode of Alias tonight at 9 if anyone still hasn't started watching yet. After watching this particular episode, this is a good (and very brief) overview of the characters and events to date

Walmart unclear on the storyline of The Hobbit

"I hope, and have asked, that those people who unchain (the girls) and ask them to go wild make that trip" to jail. (From the not-far-from-here department)

A short, dumpy man has been going around town faking choking episodes, apparently to get attention from women.