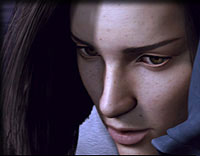 I finally got around to watching the Final Fantasy movie this morning and it was definitely impressive. The story is a generic sci-fi plot that develops through the addition of plot-holes, and the music, though played by the London Symphony Orchestra, is fairly uninspired, but the visuals alone are worth the price of admission. Final Fantasy is the first movie to attempt computer-rendered humans, and the results are very lifelike and fluid.

One of the biggest problems with computer renderings is the suspension of disbelief from problems such as weight and the accurate representation of physics and particle effects. The movie does such a good job at its presentation that I often forgot I was watching a computer-animated movie. Several scenes were lifelike enough to have come from any big budget live action movie. If you have any interest at all in computer graphics or visual technology in general, you shouldn't miss this one.

I've never been a big fan of the Final Fantasy series of video games, although they've developed a massive following since their early days on the NES. I've always found the plots hackneyed with too much lost in the poor Japanese translation. Characters only ever emote their feelings with "Uhhh" and "Argh", and there's always a token black guy with a big gun yelling "Yo!".

"Acting is merely the art of keeping a large group of people from coughing." - Ralph Richardson