Flourish is a fairly recent "card passing" game where you score points for constructing the best garden while passing your weakest cards to your neighbors. Cards depict flowers and features that give your garden a raw score, and multipliers that crank those scores up at the end of each round and the end of the game. 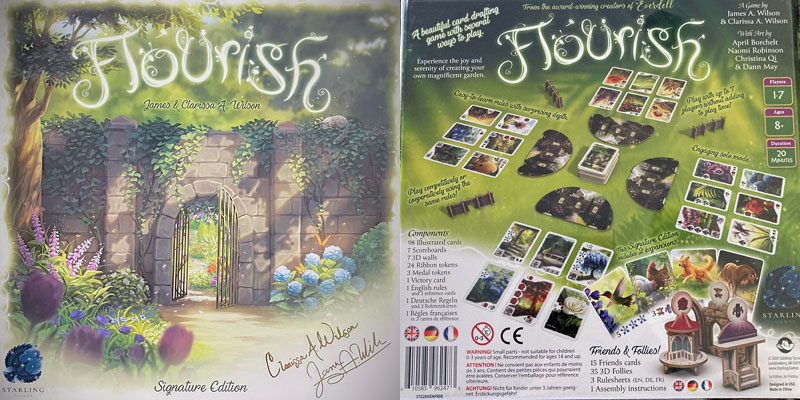 I picked this up for the family for Christmas, having searched for a game that would be interesting for 2 adults to play but accessible enough for Maia "Tokaido Lover" Uri to play along with. It's a hit with Maia although she normally just builds the prettiest garden rather than caring about scores.

There's an overwhelming number of cardboard game pieces that need to be built, but 90% of what's in the box is only for the "Follies" expansion and can be ignored until you're ready for it. The base game is very light in terms of setup and teardown. Each game is fast, taking only 15 - 30 minutes to play out.

The game can be played at a relaxed, low strategy pace and the trickiest part of gameplay tends to be deciding what cards to hold back from your opponents even if you have no use for them yourself (similar to Lost Cities). With only 2 players, the card passing tends to devolve into trading the worst 4 cards back and forth, but the game supports up to 7 players which helps with passing variety.

There are multiple game variants and two free expansions in the box, "Friends" and "Follies", designed to gently increase the level of strategy involved. If you just want a nice game to play at the end of the day, the base game or the "Friends" expansion are perfect. We haven't tried the "Follies" expansion yet but the billion cardboard cutouts required have been repurposed as bunny houses in Bunny Town.

Final Grade: A, easy to setup, easy to learn, lots of replayability