Twenty-six years ago today, on July 21, 1995, I attended the second worst live musical performance of my life.

I was 3 weeks into my stint at the Governor's School for Visual and Performing Arts, and the curriculum regularly tried to take advantage of the Richmond setting by sending us off to live performances all around the city. On this evening, we were bussed to the Carpenter Center (now Richmond CenterStage) for a production of Gilbert and Sullivan's Yeoman of the Guard. 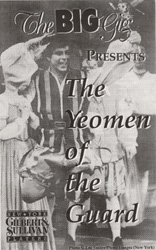 It was a dark and stormy night. So dark and stormy that the actors' bus got stuck somewhere causing the show to start 45 minutes late. Of course, the audience was already captive in their seats and the ushers refused to let a pack of unruly high school kids back out into the lobby, so we passed the time in the worst seats at the very back of the balcony in various states of wisecracking, sleeping, and admiring how well the attractive kids cleaned up for a night at the theatre.

When the show finally started, it became apparent that the leads had either gotten high or drunk on the broken down bus. Pitch was all over and it seemed like half of the lines were ad libbed. We couldn't tell for sure because there were constant sound problems that caused whole monologues to drop off the mics. At intermission, many of the paying audience members left, allowing us freeloaders to get better seats, but this did not improve the show a bit.

This was the time where everyone in theater had Les Mis envy, so of course this production had an obligatory revolving set. The show peaked when one of the two leads tried to leave a scene through a gap in the revolving set that moments ago had just been a solid wall. This would have gone completely unnoticed had the other lead not realized the mistake. She ran back to the scene and then opted to use the built-in doorway as intended, as if proving that only her scene mate was useless. This caused most of the audience to start hissing, fed up with the whole thing.

The show finally ended at 11:45 pm. The power was out across the campus when we returned to our dorms, which was still fewer technical difficulties than the show we had just endured.