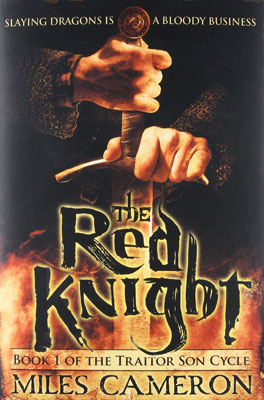 The Red Knight (Book 1 of 5 in the Traitor Son Cycle) is a master class in weaving multiple points of view together into a satisfying convergence of plot, suspense, and character development. This master class isn't for everyone, however, spanning three whole semesters and requiring much more concentration than you might be used to in your fantasy reading. The book tells the tale of a mercenary company that accepts a contract to protect a convent of nuns and finds themselves in the midst of a siege between humans and the creatures of "The Wild", a catch-all stereotype for varied races in the North deemed (by humans) to be primitive and beast-like. The story effectively blends the raw, martial depiction of war with an interesting magic system and a feudal-like social and religious system.

The Red Knight functions equally well as a standalone and a lead-in to the rest of the series (which I have not read yet). Sufficient reveals are included to make the mysteries in this book feel complete without cliffhangers, but enough hints to a broader conflict exist to lead into later books. The most difficult aspect of enjoying this story is the sheer number of characters involved. While the language is very easy to process, characters surface for a few pages at a time before vanishing, sometimes given different names, nicknames, or (in the case of The Wild) species names depending on the current POV.

The old adage that people can only remember 7, plus or minus 2, bits of information at a time holds true here. I originally purchased this on Kindle and the fact that I would regularly forget that I had already been introduced to a character led to tedious bookmarking and searching to refresh my memory (and I read pretty fast!). Ironically, switching to the paperback edition did not help because it was deckle-edged and impossible to flip back in search of where I had heard of a character before. If you are willing to keep a notepad handy and record the pages / locations where characters are first introduced, your overall reading experience will be much friendlier.

The book is not without flaws -- some readers (myself included) will get distracted by the number of minor editing errors, like the use of it's vs. its, or odd run-on sentences that a generous reader might dismiss as attempts to create a unique dialect. Characters will often do an action like "raised his hand" or "sat down", only to do it again just one sentence later. There is constant confusion in the use of east and west, which is particularly noticeable since there is no printed map included in the book. For people that like to build a mental map in their head, this makes the relationship between the location of the convent and other cities in the world more difficult to piece together.

There are also an exorbitant number of details about combat moves and expertise in weapons and armor. I understand that the author has plenty of real-world expertise in these topics, but they felt overproven and sometimes read like a pedantic D&D dungeon master. After finishing, I was very impressed that no scene felt unnecessary, although many scenes could clearly have been tightened by a good editor. This is a 500 page story in a 650 page book.

In spite of these flaws, the implied relationships between characters and Rube Goldberg-esque trickle of events towards a common conclusion are tantalizing and kept me reading. Most characters are fairly two-dimensional with a few memorable traits (like "this one likes to eat a lot"), but they work well within the world to propel the plot forward. By the time the last "main" character had been introduced about halfway through the book, I had no choice but to eagerly see how it all turned out. And by the time I reached the end, I felt as tired as the depicted knights and squires, who fought The Wild in a perpetual state of exhaustion throughout the siege.