Hatching Twitter: A True Story of Money, Power, Friendship, and Betrayal by Nick Bilton:
I picked up this book because I still don't understand how Twitter can be such a valuable service. I was vindicated since it seems like people who run it haven't quite figured it out either. This was an entertaining read featuring incredible levels of backstabbing and power plays amongst the original founders of the service. The only downside is that the book only goes up to about 2013, so any more recent successes or failings of Twitter are not covered.

Money Heist, Part One:
I'm guessing the show became "Money Heist" in the US because we have too many "House of" shows to use "House of Paper". This show tells of a band of criminals who break into the mint to print their own money and has kind of a Spanish Prison Break vibe to it. It's passably entertaining in broad strokes, but doesn't sell the logistics of the heist and character motivations quite as well. The subtitles are atrocious too. Free on Netflix. 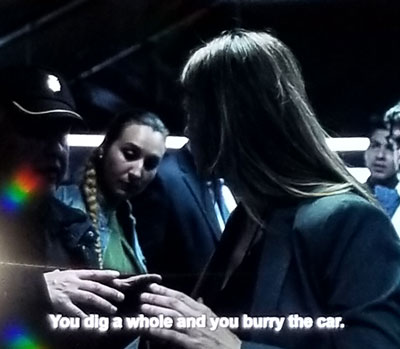 Modern Family, S9:
This season was just fine -- it's at its best when not focusing on Cam or the annoying toddler. That said, I think it's about time to push this show out to pasture.

Dark, Season Two:
The second season was riveting, and better than the first. There was less of a need for character reminder cheat sheets this time, but the dialogue-less scenes (which I would normally hate for wasting my time) are still helpful for letting the weight of each scene really sink in. I loved the way the characters evolved such that everyone is sympathetic at one point or another, and everyone really thinks they're on the right side. I especially liked the changes of Katharina and Noah, both of whom were pretty one-dimensional in the first season. There still aren't quite enough answers, but there's only one (already greenlit) season left and it doesn't feel like anything is going to go off the rails. This series is a perfectly paced, brooding thriller that transcends the annoyance of reading subtitles and will have you thinking long after it ends. Free on Netflix.