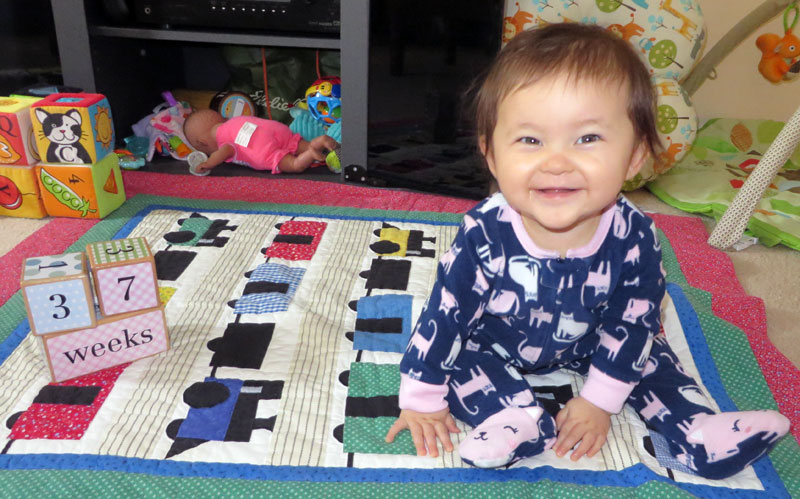 It has been an eternity since the last battle report at Week #32, and Maia is now 8.515 months old. She finally broke the 16 pound threshold but is not so close to the 18 pound line that we have to worry about her quickly outgrowing her bulk box of Size 2 diapers or reporting her to the local fishing warden.

Much has changed in the intervening month. She started shrieking again back in Week #33, but thankfully that was very short-lived. In Week #34, she caught the gross sickness that both of her parents had suffered through, to the point where her voice sounded like an answering machine message from the 80s and she oozed phlegm all over her crib like a confused snail. This sickness cleared up just in time for our LA trip, which was great because we didn't want to deal with both flight and sickness at the same time.

We flew back from LA on the day after Daylight Savings Time and our attempts at doing the requisite sleep cycle / time zone math took us into a tesseract so we finally gave up at trying to normalize anything. After two uncomfortable days where she got no sleep at all, she is now doing 10.5 - 11.5 hours continuously at night, followed by 1.5 - 3 hours of naps during the day -- almost where an average baby would be at this age.

Today, Maia likes pointing at things and rolling around the room (she just barely started what could leniently be called a "crawl" this week). She can sort of clap at the right places in "If You're Happy and You Know It", and can pick up cereal bits with her pincer fingers. Most importantly, she has two bottom front teeth which make her jut out her lower jaw like Popeye sometimes. With minor mobility, she is pretty agreeable throughout the day, although she does get bored of being in one room for more than about 20 minutes. She is also uneasy about her grandparents right now, possibly a side effect of being the belle of the ball amongst all of Annie's relatives at the wedding and getting passed around like a hot potato.