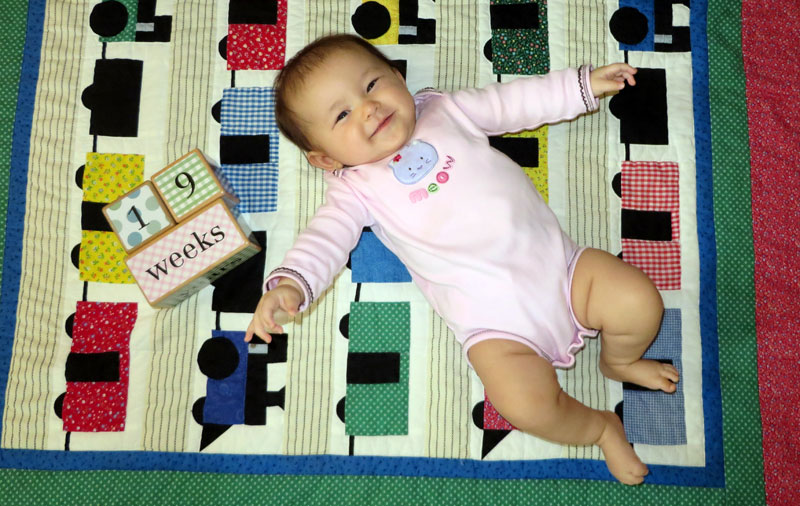 Maia is now 19 weeks old and quite a different baby from last week. In the baby biz, there is a concept called a "wonder week" which is where the baby is precociously fussy and you "wonder" why you had it. This is supposed to last a few days at every developmental milestone, followed by the opening up of a broad array of new skills. Maia's week 17 wonder week lasted about 3 weeks, starting around week 16, confusing the straight line of time more than an episode of LOST. The Daylight Savings Time change had minimal effect on her, but her round of 4 month vaccines exacerbated the grumpiness like wet sand in your swim trunks.

Since last weekend, however, it has all changed. Maia now goes to bed around 10 - 11 PM and then sleeps straight through until 7 - 8 AM. We did a few practice runs of letting her cry to sleep and it only took 3 failed attempts before she understood the concepts and mastered them with a gold star. When she's up during the day, she's calmer and more prone to taking it all in like a monk (on Wednesday, she spent a leisurely dinner at Cafesano with us without any fuss).

On Tuesday, we gave her the first taste of solid food: a pureed bit of avocado. She had roughly the same reaction to avocado that I do -- "There's something weird on my tongue and I hope I'm not allergic to it". She'll probably have a better reaction to rare steak, which is probably the next edible milestone.

We're still guiding her through calisthenics to improve her muscle tone for future autonomy. With support, she can SIT and STAND and other simple verbs from 1980s text adventure games. She is aware of Amber, and Amber is aware of her -- the cat will sit with Rebecca during feeding time but won't get too near Maia at any other point. It won't be long before they have their own Calvin and Hobbes situation though. I'm sure of it! 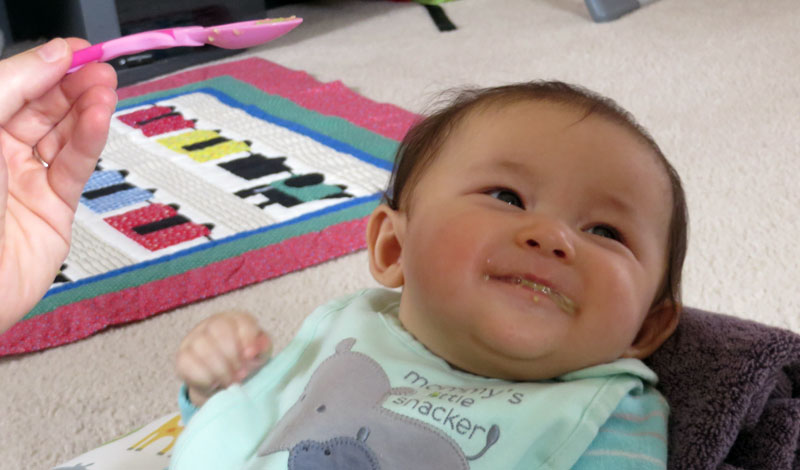