There are no spoilers in this review, which is also posted on Amazon. 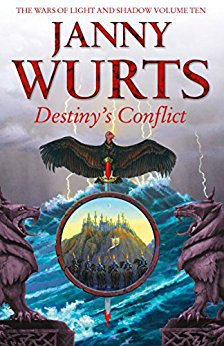 It has been 22 years since I discovered Curse of the Mistwraith, the first book in the epic Wars of Light and Shadow series that has since become my favourite fantasy series of all time. I discovered Janny Wurts through her collaboration on the Empire trilogy, where I felt that she breathed true emotion, political intrigue, and character development into an otherwise cookie-cutter, two-dimensional universe. Since then, the WoLaS series has invaded my bookshelf like a pleasant plague in triplicate, with hardcovers for armchair reading, paperbacks for loaning, and Kindle copies for rereading the whole series without spraining a muscle.

In my earlier reviews, I used to warn new readers that the prose was challenging -- a unique style full of memorable turns of phrase and Scrabble winners. With 10 books under my belt, I would like to revise my warning in a more positive light: this is a series that is intricately and intentionally designed to reward you for your investment and patience. In the Netflix age where everyone is proud of bingeing content as quickly as possible (only to immediately forget what happened when the next season rolls around), the WoLaS series is one that rewards any reader who can stop and savour the onion-layered prose methodically without speed skimming. As the series progresses, the author continues to paint new context onto seemingly straightforward events from the previous books, deepening and unfolding the world into beautiful complexity, rather than needlessly prolonging the story to infinity with pointless filler plots or deus ex machina devices.

Destiny's Conflict is the second and final part of Arc IV, Sword of the Canon. Each Arc is a self-contained story that may span multiple volumes due to the physical limitation on the size of a bound book. (Because of this separation, reviewers tend to rate the early volumes in an Arc lower when they don't realize that the true climax of the Arc has not yet happened). At a minimum, you should read the first part of Arc IV, Initiate's Trial, before diving in, but of course, the story will be more impactful if you have followed the yarn from the very beginning of Arc I.

I rated Initiate's Trial with 4 stars when I first read it, but with Destiny's Conflict finally available, I would rate the Arc as a whole with 5 well-deserved stars. Destiny's Conflict is a constant stream of climactic events, with the trail of plot dominoes painstakingly set up in Initiate's Trial (and earlier books) satisfyingly toppled in ways that are simultaneously surprising yet clearly choreographed from the beginning. As a vague non-spoilery example, there was a distracting scene in Peril's Gate that I always felt was superfluous to the story which becomes a key facet of Arithon's actions against the Koriathain here.

The plot in Destiny's Conflict constantly moves forward, with critical events happening in every chapter -- the pace will definitely satisfy readers who felt that Arc III moved a little too slowly. The action decelerates a few times for some heavy backstory (in sections I have facetiously branded as "Arithon and Elaira go to the library"), but for fans who have kept up with the story from the beginning, these sections are chock full of the powerful context needed to better appreciate the earlier Arcs.

Please note that my rating and review here are based on my first, fast devouring of the book. As such, I'm absolutely positive that I have not digested every single nuance of the story, especially in the layered conversations that often seem to fill the negative space around the intended point without making it explicit, leaving you room to draw your own interpretations. My subsequent readings will surely highlight the bits I missed the first time around, increasing my appreciation for the book and the series as a whole.

And that, I believe, is the whole point.