Twenty-one years ago today, on September 2, 1994, I had a party celebrating my fifteenth birthday. I was about to start my junior year at TC Williams, and although Alexandria had a caste system based upon which of the two junior high schools you attended, my guest list Venn diagram'd multiple circles, thanks my place on the Crew team.

I had my party before school started (oddly on a Thursday this year instead of the traditional Tuesday after Labor Day) to make sure that everyone could attend -- the entire crowd was required to be in town for band and sports and other activities, so no one was away on last-minute vacations. Below is a picture of Jack, Ben, Kwan, and Jenny, gathered around the table where I was distributing free copies of the murder mystery thriller I'd written over the previous summer. 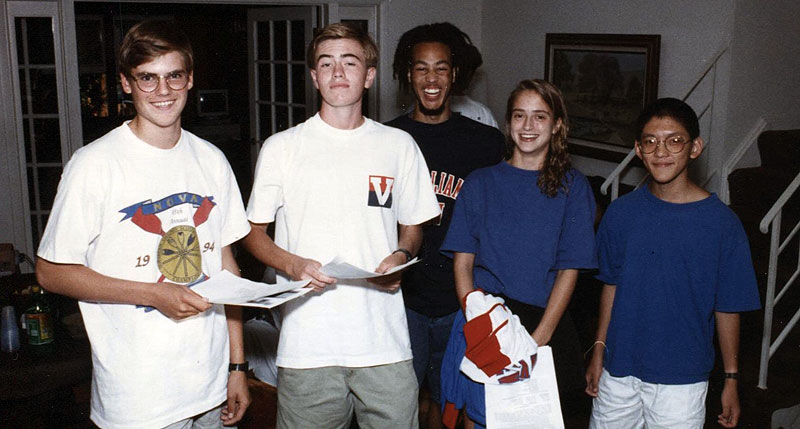 As usual, some of the guys arrived an hour early to check out whatever the latest and greatest video game was. This month, it was the shareware version of DOOM, which had been around for a year, but was only just beginning to show up in stores. My dad didn't believe in those newfangled BBSs so "downloading games" was a foreign concept. Games weren't limited to the guys though -- Cheryl and the other Jenny took over the Super Nintendo in order to see if their skills from the tennis team translated into Super Tennis (they did not).

The first order of business once everyone had arrived from their "unofficial" sports practices (branded as such because it was technically illegal hold practice before school started) was the traditional treasure hunt, where everyone broke into teams and followed clues to a big prize, usually a giant box of TWIX bars. Treasure hunts usually devolved into a chaotic tangle with one team cheating and the others fighting over the prize, but this was part of the charm. 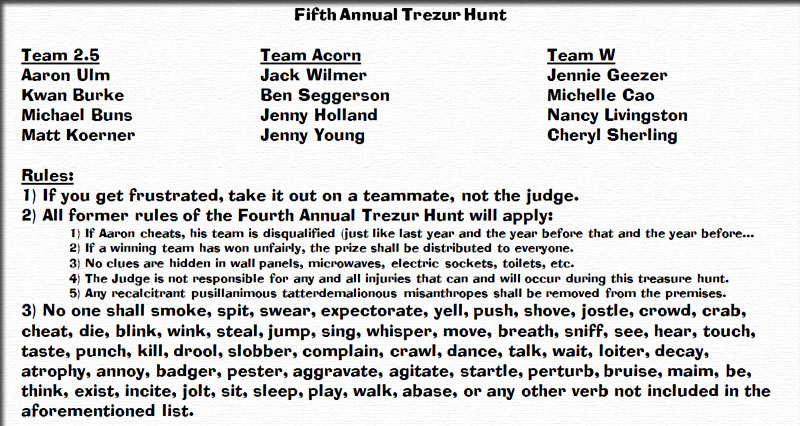 After the treasure hunt, we went into the backyard to play volleyball. Before we could begin though, Kwan hit the ball up on the roof. We never actually got to play, because by the time I had made it up there to retrieve the ball, the Pizza Hut pan pizzas had arrived. Later, we did the awkward ritual of sitting in a circle while I opened presents. An old journal show that I received the following gifts:

The party ended innocently around 10:30 after a game of Bloody Murder, lacking in any debauchery or scandal one might expect from watching too many teen movies from the 90s.