Rain on the third morning in Seattle was a gentle tease, not unlike an interrupted cadence after a dominant pedal that fades out on the Top 40s Classical Music station before it can resolve to tonic. After huevos rancheros for breakfast, we walked back downtown and took Bill Spiedel's Underground Tour -- a lightweight historical tour of Seattle told from the tunnels beneath the city with extra emphasis on brothels, toilets, and puns. The tour was based around his history book (a typical self-published affair with overuse of ellipses, sentence fragments, and exclamation points), and provided a nice, succinct overview of Seattle's progression without the boring minutia. In a nutshell, they built too close to the water, pooped everywhere, and then took the opportunity to rebuild everything one level higher after a large fire. 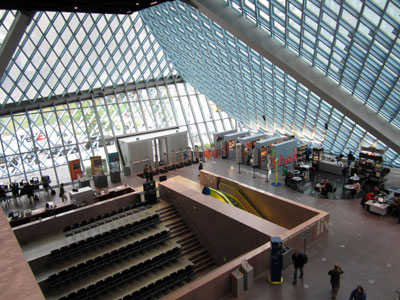 From there, we toured a small, free gallery filled with modern art for sale in the thousands, an artisanal glassblower's shop where they were making Christmas ornaments, and the Grand Central Bakery for a chance to warm up with hippie sandwiches. We then walked to the Monorail station by way of the Seattle Public Library, an impressive homage to literacy in spite of the overbearing signs warning against being homeless whilst in a bathroom stall. The Monorail only had two stops and barely travelled half a mile, but it was quick, cheap, and worth the shoe leather.

My favourite part of the Seattle leg was the EMP Museum (Experience Music Project). At the time of our visit, it housed exhibits on Fantasy Worlds, Sci-Fi Icons, Horror Movies, Jimi Hendrix, the Evolution of the Guitar, Nirvana, and the History of Music Videos. Each exhibit balanced interest and interactivity well, without being too comprehensive (unlike The Spy Museum). We had reserved about 3 hours for this, but ended up wishing for another hour or so when they shooed everyone out at closing time (of course, the gift shop remained open for another hour).

In the evening, I caught up on my online coursework while Rebecca took advantage of a local yoga class. The rain finally hit in earnest this evening, with a downpour just as we went out to Pike Street for dinner. We had a warm, dry dinner at Bimbo's Cantina, a college-esque Mexican restaurant with bland, cheap food. Afterwards, I was bowled over on the sidewalk by a mumbling man clutching a bundle of blankets, and then defended by a trio of drunk, indignant stoners.

On Tuesday, we finally left Seattle and visited Anna's sister, Emily, south of Tacoma. With my knowledge of alien abductions, I was able to simply wave my ID to get on base, although Rebecca's driver's license was scrutinized heavily. We stayed for a couple hours, catching up on old times and older children, and then drove out to scenic Highway 101 for our trip up the Olympic Peninsula (a word which I always initially spell with too many Ns). 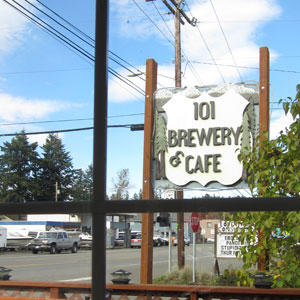 We stopped for lunch at the 101 Brewery, a modest roadhouse with surprisingly good burgers and beers for a place where you pay at the counter and the restroom is only for customers. It's definitely a good place to stop on any trip around the coast in spite of its poor sign kerning.

Lake Crescent Lodge is very much off the beaten trail, buried in the rain forest, and twenty miles from any semblance of a town. We arrived there in the late afternoon in moderate rain, and got a comfy, spartan room (no TVs or phones) looking directly onto the lake. Each room had a parking lot door and a lake door, which definitely complicated the posted Fire Emergency instructions: "In case of fire, exit via the front door, OR exit via the back door. Meet outside." 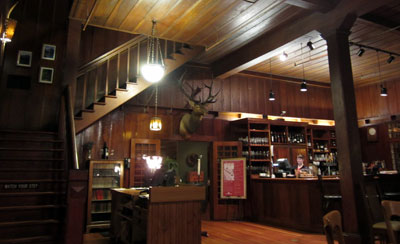 Although it was too late and drippy for serious hiking, we did the short Moments in Time Loop hike near the Lodge. The trees were weighed down with more green mosses than the set of Fraggle Rock, and we kept getting startled by black-tailed deer who would lurk just around the corner until we arrived.

That night, we ate in the informal warmth of the main lodge near the giant stone fireplace, where we had smoked salmon and clam chowder. With strains of 1930s four-beat jazz softly piped into the room and an Elysian stout in hand next to the Scrabble board, Rebecca remarked that we were like renegades lost out of time, braving the thunder and rain to enjoy the companionship of like-minded souls around the lake and its environs.

To be continued next Tuesday...