Washington Travelogue, Part I of IV 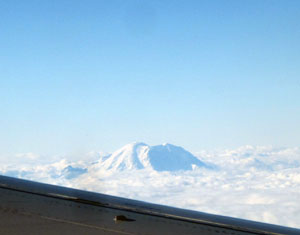 Apart from the non-alcoholic beverage service on our United flight, everything else was behind a paywall -- from the snacks and meals to the movie options and even the real-time map of where the plane was at any given time. Luckily, we were blessed by the newfangled "TSA Pre" lines where you don't have to remove any clothing or deconstruct your luggage to get through, followed by an uneventful, direct flight and a majestic view of Mount Rainier looming above the cloudline.

We arrived in Seattle to a mild rain and, after getting a free rental upgrade from a Toyota Yaris (or Yaris-like alternative) to a Corolla S, we drove to the nearby suburb of Des Moines for lunch with Rebecca's grandmother. Later, we experienced Seattle traffic (which didn't seem nearly as bad as any given day on I-66) and arrived at the 11th Avenue Bed and Breakfast in Capitol Hill. The owner, on his way to a charity event, quickly circled several nearby neighbourhoods that "got wild at night" on our map and then showed us to the comfortable Ruby Room. Intent on beating jet lag as quickly as possible, we spent the next few hours roaming the streets of Capitol Hill amidst a sea of facial hair and horn-rimmed glasses.

This area of Seattle was typical of a big city, with pedestrian traffic at all hours and scores of the mentally unwell souls who had slipped through the cracks talking to themselves in doorways or swirling through a Venn diagram of students, clubbers, and panhandlers. It was very walkable, and never felt unsafe.

We ended up at the Elysian Brewery for our first night's dinner, where Rebecca had a flight of pumpkin beers and an organic-sounding dish that she decided was 95% unnecessary carbs, mostly from cous-cous overload. Having stayed awake until 10 PM Pacific, we deemed the night a success and quickly fell asleep.

The next morning, we got up at 5 AM, and then again later at a less retarded time. After a breakfast of French toast with the other B&B patrons, we walked the 1.5 miles to Downtown Seattle for a typical touristy jaunt through Pike's Market. I mostly moved through the crowds people-watching while Rebecca took pictures of flower arrangements and smelled every item in the lavender stall (spoiler: they all smelled like lavender). From there, we hit the Space Needle by way of the Olympic Sculpture Park.

For most of the week, the weather was surprisingly accommodating. This day, in spite of the dread calls for rain, it was sunny with highs in the low 70s. We got good views of every mountain (the Cascades, Mt. Rainier, and the Olympians) from the top of the Needle. 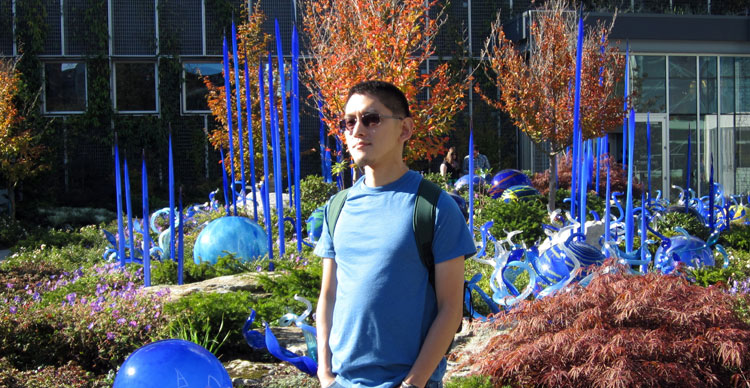 After a quick lunch at Marcina Bakery, we also visited the Chihuly Glass and Garden exhibit. I had low expectations, since all I knew of Chihuly was the awful balloon animal chandeliers in the foyers of many museums and art galleries, and my expectations were just barely met. The museum was small, sparse, and not worth the admission fee. Apparently, Chihuly branched out from glassblowing on occasion, as evinced by the wall of third-grader-quality paintings in a poorly-lit exhibit near the restrooms. 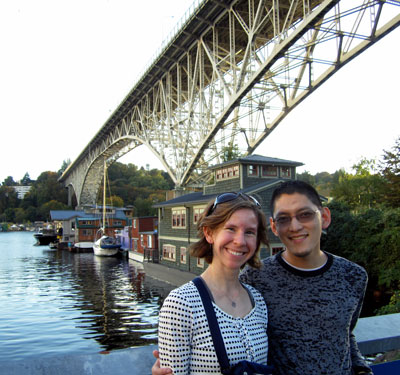 We walked back to the B&B after Chihuly, straight up the infinite hill on Denny Way, and then drove out to visit Mollie and Hillel in Fremont, who we'd last seen at their Spokane wedding in July, 2010.

After the navigational challenge of learning that there was a second street directly under the main highway that did not show up properly on Google Maps, we posed for the obligatory tourist pictures with the Fremont Troll, a giant concrete sculpture under Highway 99 that was only mildly tattooed with obligatory big city graffiti.

We had drinks at the Fremont Brewery, and then walked to a nearby Turkish restaurant for dinner before finally visiting our hosts' temporary home in west Fremont, packed with a pug and three friendly cats. We learned from Hillel, who works in real estate, that a modest single-family home in the nearby Ballard neighborhood started around $600k, crushing Mike's dream of having us as next-door neighbours sometime in the future.