We did not attend the grand opening of the Silver Line, so we weren't a part of the gleeful crowd calling it a "win for America". However, I was tickled to learn that an escalator had actually broken down at the McLean station as I had predicted on Friday. 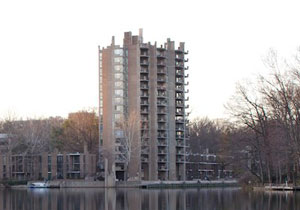 Instead, we opened our weekend with a trip to Target for sundry goods, like a new travel crate for my car trunk to replace the one that finally cracked open after fourteen years of Costco goods transportation, and a new swimsuit to replace the high school era suit that constantly collected sand to chafe my legs. In the afternoon, we drove down to Fairfax for the housewarming party of Joe & Katie, who now own a classic Chantilly-layout home with a salmon-coloured family room.

From the housewarming barbeque, we went to Jack and Kristy's in Arlington to celebrate Johnny's 4th birthday and catch up with Jack's whole family. There were far fewer kids than expected, although I then learned that the kid event had been in the morning, and they had essentially been entertaining all day as a marathon sport. 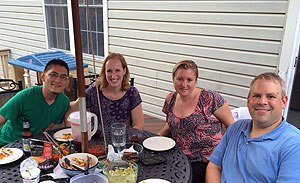 On the way home, we stopped at Lake Anne for a walk around the lake. I tried to convince Rebecca that the Lake Anne high rise would be the seedy ghetto in a movie about a dystopian Reston future -- just use CGI to add some smog and graffiti, and then erase the top few floors as if there were a meth lab explosion and you're all set (starring Kurt Russell).

Sunday was laundry and Orphan Black day, followed by a mini FSU-reunion at Kathy's house with Mark and Marta, who I had not seen since I left Tallahassee in April 2003. We ate fajitas and talked about babies and band music, but mostly babies.