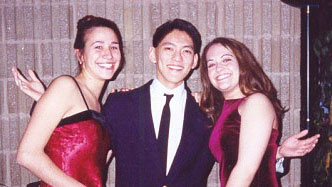 Thirteen years ago today, on November 20, 2000, I took the GRE in order to secure my eventual berth aboard the good ship FSU. Thanksgiving vacation week had started at Virginia Tech, and because we had a whole week off, most students did the only logical thing and skipped town 5 to 7 days before the week began. I was mostly alone in Blacksburg, except for Shac, who crashed in my apartment (while Rosie and Anna were home) because he was fighting with his parents.

The GRE is like the SAT but with different letters and more annoying questions. At the time, it also had the obnoxious "adaptive" quality, where questions get harder as you do better (this was removed in 2011). So, the first logic question might be "Ann and Bob want to shake hands with each other using only left hands. How many different ways can they do this?", but eventually you would end up at "Ann, Bob, Charles, Dick, Elias, Francois, Gertrude, Haughton, Iggy, Jesse, Kyle, and Lamonashiqua are all blood relatives and, as residents of Alabama, also married to each other. How many different family trees can you create which are only two generations deep if Charles is gay?"

I took the test at a Prometric computer center in Roanoke, which was just like the ones up here but with dirtier mice, and then went home to await the arrival of my sister from Charlottesville. The following morning, we drove from Blacksburg up to Flint, MI to visit my grandpa for Thanksgiving, a trip made much more difficult by the two feet of snow dumped on Route 460 overnight. We were in Ellen's '98 Honda Civic, and I let her drive the rest of the way after the second intersection I slid through at 2 miles per hour because her poor brakes.