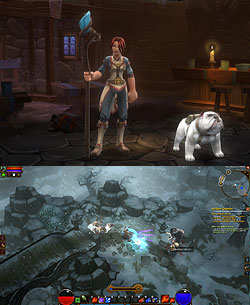 I can't argue against the fact that I enjoyed the first 100 hours or so of Diablo 3, but ultimately, even rose-colored glasses of nostalgia couldn't conceal the lack of longevity in the game's design. The series went from "fast-paced clickfest to get better loot" in D2 to "increasingly difficult arcade game where you amass gold to buy the best loot at the Auction House" in D3. When loot itself is not the point, but only a means to get farther along in a nonsensical storyline, it's just not worth the grind. And, killing monsters to earn gold to trade for a weapon will never be as rewarding as finding that weapon in the course of the game -- if I wanted the former, I would go to the mall and play Skeeball for tickets.

Torchlight 2 is much closer to the game I hoped I'd get in Diablo 3, made by the original Diablo developers and featuring the sometimes-too-familiar music of Matt Uelmen. The formula is improved slightly (for example, a pet that can sell all of your trash loot so you never have to return to town), but the core gameplay is fun and familiar. Clicking always feels responsive, although there are sometimes pathing issues in very narrow areas of the map. Going against the example of recent Blizzard games (and most porn), you do not need to be connected to the Internet to play with yourself. For team play, both Internet and LAN options exist, but there are no closed servers or "Battle.net"-like functionality.

Environments are varied and colorful, with a cartoonish look that never takes itself too seriously. The story is merely a skeleton to hang loot upon, and it can be completely ignored -- it never bashes you over the head with butterfly witches, elementary plot twists, or really awful dialog. The loot has much more variety, and unique properties on your items make trade-offs much more thought-provoking than D3's "find the piece with your primary stat and sell the rest" approach.

Torchlight 2 reverts back to the old system of granting stat and skill points to allocate each time you level up. I never minded Diablo 3's no-penalty reassignment system, but have no problems with this system either. The skill trees are more like skill shelves: there aren't prerequisites, so you don't have to invest in useless low-level skills to unlock higher ones. The permanence of this system might lead you to planning paralysis though, if you are one of those gamers that plots out their build before starting the game. I definitely spent too much time theorycrafting characters on paper, but for me, it's fun.

It's true that I got my $60 of entertainment from Diablo 3, but I've already exceeded that amount with Torchlight 2, a $20 game. It won't change your life, but it's an engrossing loot-whoring game with a wide variety of character build possibilities. It's also perfect for the gamer that can only play in short bursts because they made the mistake of getting married, having kids, or committing to more tangible extracurricular activities -- you can pick it up, play for twenty minutes and be satisfied.