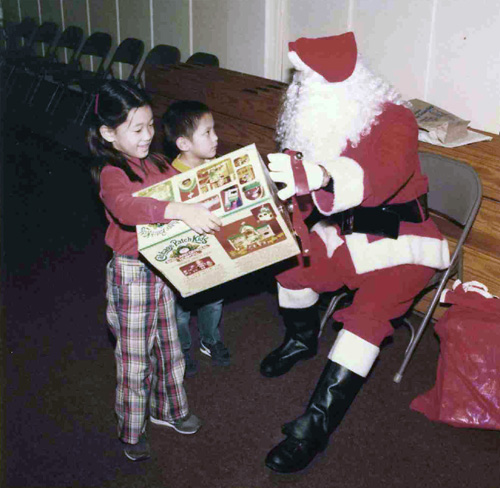 In the early years, we would go to an annual Christmas event sponsored by the adoption agency that bestowed the two-day shipping on my sister and I. Our parents would bring a couple gifts that they'd already planned to give on Christmas, and a Adoptosanta would give them to us as if they were his idea (Adoptosanta later faced an audit from the IRS).

As you can see from the expression on my face, I was not buying his routine, and did not think highly of what seems to be a Cabbage Patch Kids in the Senate Rotunda set. I must not have realized that my own gift was separate and coming soon -- this was probably the year I received the Transformer that was supposed to turn into a gun but was so poorly built that it just turned into a robot in the midst of a swan dive, resembling a mismatched lump of detritus not unlike one of those rope-and-bar mind puzzles that no one ever has the patience to finish.

This strategy didn't work when I taught ear-training