Stuff in My Drawers Day: Letters of Chastisement

This is quite possibly the most scathing letter I have ever written. 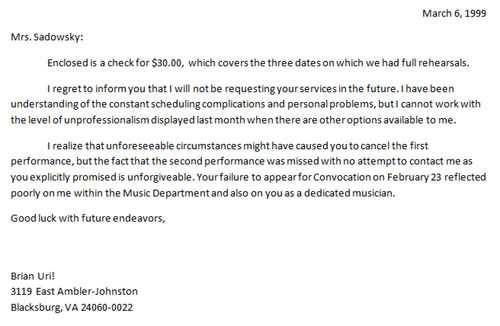 Spring 1999 was a tight time for music majors at Virginia Tech, because one of the standard piano accompanists had just had a baby and another was only taking half of the usual performers. To meet the mandatory performance requirement, I decided to jump ahead of the pack by performing early and employing the services of a new pianist who had just arrived in Blacksburg.

After the first rehearsal, it was apparent that we were not well matched, as she was expecting a vocal accompaniment of the recitative variety, where she could pound out a whole note chord while some soprano tried to emulate the vocal arc of a drunk butterfly. Instead, she got the first movement of the Halsey-Stevens trumpet sonata, which switches meters more often than the National Geodetic Survey, and treats downbeats as general suggestions. She insisted that she could soldier through though, and promised to improve by the time of the performance.

Two additional (oft-rescheduled) rehearsals didn't give me much more confidence, but I reasoned that I could just use the standard "well, I'm not really a performance major" excuse should it turn out poorly. On the day of the Convocation, she arrived at the Recital Salon in tears, moments before we were scheduled to play. It was obvious that some great personal tragedy had befallen her, and after a quick check with the everpresent-backstage Jim Glazebrook, we agreed to postpone the performance to the following week.

The problem with this strategy was that she didn't show up the following week, and didn't answer any phone calls. After I finally went to her home to make sure a refrigerator had not fallen on her, she told me that she would no longer be able to perform with me, closing with a request for the money owed on three hour-long rehearsals.

And when I finally got the piano score back, I found that she had scratched out every note under a tie to the point where pencil markings outnumbered the original notes, rendering it useless for any future performances.