The nice thing about having a website that refuses to die before it jumps the shark is that eventually your "Ten Years Ago" column will be able to refer to old posts to prove that you actually did go to music grad school or own a motorcycle or get banned from entering Libya because of a religiously insensitive hat. 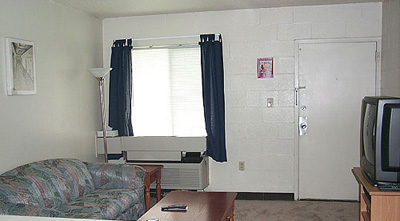 Ten years ago today, I was living in Parkwood Apartments two blocks from the FSU Music Department College School Commune and studying hard to become a professional composer (which is like an amateur one, but with less time for composing, and more grants to apply for). Each apartment was hewn from cinderblock like a combination toaster oven / motel room, although my high rent (for Tallahassee) of $450 a month meant that it was relatively clean, relatively quiet, and did not smell of urine-infused grapes.

The NIMDA worm had recently been unleashed on the Internet so connections to the place where this website was hosted (music.vt.edu) were sporadic for several days. Likely though, I used NIMDA as an excuse to not write a post, and spent the afternoon mindlessly playing Diablo 2. I was also still fascinated by the movie, Memento, and trying to get everyone I knew to watch it.

There weren't a lot of folks to convince at this point though, because I had not yet fallen into that wrong crowd of music theorists and composers that would corrupt my soul over the next two years. Being shy and new in town, I employed my traditional approach for making friends, which involved sitting at home alone on the weekends until the sheer musical genius of my coursework (and its font selection) convinced everyone that I was awesome and needed to be invited places. This also worked at Virginia Tech.

This isn't to say that I was completely antisocial. As anyone from the caste of the perpetually single can tell you, you're always sizing girls up for the prospect of a relationship, even when you tell yourself you aren't -- there is no on/off switch involved. I recall working diligently to chat up the friendly graduate assistant who worked in the office, only to be stymied about a week later when I noticed her wedding ring -- this is the type of scenario that undergrad dating gives you no preparation for. 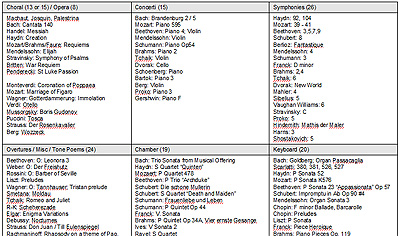 I also recall the cute freshman string player I met while observing one of Juan's introductory classes for Music Pedagogy. I even went back the following day (which blew Juan's mind, because no one wants to observe more than the mandatory number of classes) only to find that she had skipped, leaving me to sit through fifty minutes of people unfamiliar with the treble clef. Nonetheless, we would meet again during my many trips to the music library where I would help her with some theory and she'd check out my endless batches of scratched CDs.

The reason for checking out so many CDs was the dreaded Listening Exam, which consisted of 125 selected works. You had to pass a listening test with 14 or 28 songs correctly identified before receiving your Masters (21 for Doctoral students). Since I was not yet ready to part with adolescence at the time, I resolved to get 21 right on the first try so I wouldn't have to take it again as a Doctoral student. Unfortunately, I didn't actually know many of the songs, and wasn't about to pay money for CDs full of twentieth century music performed by rubbing hedgehogs together, so I spent the last half of September checking out a few CDs at a time and ripping them to MP3s.

I then applied the universal lesson of public schools: It doesn't matter how well you know the material as long as you can pass the test. I grouped the songs by textures rather than eras or composers and focused on telling apart the similar clips (and ended up passing with a 24). I heard that my study sheets continued to thrive in the years after I left, which is a longer shelf life than any given composition. In hindsight, I was far better at preparing teaching and presentation materials than writing songs. 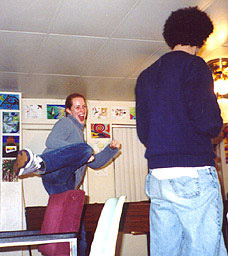 As the month of September came to a close, I settled into a routine: passing History of Music Theory factoids through my brain like kidney stones through a storm drain, eating lunch (a side of fries with ketchup) with Mark Connor, Kathy Biddick, and Mike Catania at the Loop while doing the USA Today crossword puzzle, looking forward to Dr. Spencer's wryly subversive Music Pedagogy class, and pretending that it still mattered if I practiced my trumpet every day.

"The 'whatever' will hit the fan, and we need to make sure the fan is running very slowly when that happens." - Dr. Spencer, on the pitfalls of overexplaining figured bass symbols in basic theory classes