how is this month half over already?

♠ I've been walking all sorts of miles every day for my company's fitness drive, but there's no tangible proof (not unlike the moon landings) since I seem to have lost my pedometer in New Hampshire.

♠ The handstand picture on the right shows the first time it wriggled its way off my belt, after which I somehow managed to find it again on the way back down Piper Mountain. Between there and Dulles Airport, it went missing yet again, probably because exercise is for losers and this point needed to be driven home with a mystical sign.

♠ It's interesting how easily mystical signs can be confused for coincidence. For example, it has been exactly two years since I wrote a post about what I was doing exactly X years ago. This is a mystical sign that the URI! Zone is fashioned around a higher mathematical synergy than is apparent to the naked eye, because there are no coincidences in math.

♠ No coincidences besides the nine-times table, that is. 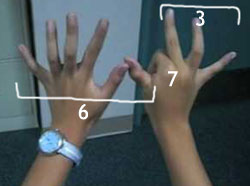 ♠ When I was a kid I used to know all of the nine-times tricks (like the fact that the digits of any multiple of nine can be summed down to nine, or putting down your Xth finger in 9 times X would reveal the digits of the answer, as in 9x7=63). The latter trick is not recommended if you're doing math in the inner city as you might coincidentally mystically reveal your gang affiliations.

♠ If I were going to join a gang, I would want to join one full of people who are either double-jointed or have too many fingers from living near Chernobyl. There don't seem to be a lot of artistic possibilities for flashy gang signs when you only have ten normal fingers. Such a gang would probably be a good candidate for performing Liszt transcriptions as well.

♠ Plans for the weekend include shopping and poker, and possibly some DDMSence while Rebecca runs in the NOVA Community College 5K Race. I could also spend some time shopping for a Halloween costume, except that I've already got everything I need!

Why So Many People Can't Make Decisions