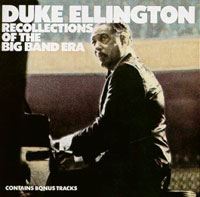 The other day, I was listening to a Duke Ellington big band CD that I've owned for at least twelve years when I heard something I'd never heard before. Buried deep underneath a saxophone solo in one non-melodic "we wrote this so people could solo on the chords" arrangement was the complete melodic line from Cherokee played by trombones in closed position harmony. After verifying that I'd actually heard it, I decided to write a news story in which the protagonist (me) is amazed at the facets of music that continue to appear through listening, even twelve years later.

I went into the basement closet where all of my CD cases are hibernating to look up the name of the track, and found that it was an arrangement of... Cherokee. So, not only did I fail to discover anything new in the music -- I also failed to ever identify the harmonies of a song I've heard regularly for over a decade.

As you can see, I decided to write the news story anyhow.

Last August he nearly choked to death during his show while imitating oral sex with a U-shaped sausage that snapped in two in his mouth.

An innovative approach to parking tickets

The bill is flawed, since there is currently no line-item for cases where more than 100 representatives are just idiots