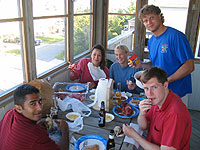 By this point in the week, I had lost all sense of what day it was so my account may be a little blurred. On Wednesday, we decided to take a break from the beach and drove around the island instead. Three people left the night before and two more showed up. We took a trip down to Kitty Hawk where we browsed through a bunch of shops. Anna and Bethany got one of those Old Time Photos with the saloon and costumes. On the way back, we stopped off at a seafood place and loaded up on tuna steaks, lobsters, shrimp, and mussels (all of which were delicious). In the evening, we ate seafood and watched both parts of Kill Bill. After watching the second half, I really want my two hours back. The movie as a whole was four hours long. If it had been edited down to about 2.5 hours, it would have been a decent, fun movie, but taken as a whole it was way too long, poorly edited, self-indulgent, and stupid.

On Thursday we were back out on the beach. I tried to renovate our Big Hole™ but eventually relinquished hole control to a family of little kids who had more serious digging aspirations than I did. I'd gone through another two books by this time, including Michael Crichton's Prey, and Janny Wurts' Master of Whitestorm and started another book after hole duty.

Thursday evening, we went to play mini golf at Mutiny Bay and then had dinner at the Outer Banks Brewery where the food was really great.