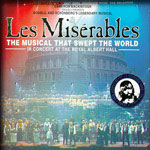 Marius: David Bryant (B) would make a good Marius in Les Misérables: The Muppet Edition. Otherwise, there's nothing particularly memorable about his performance. Michael Ball (C, T) does a great job in turning the role into a believable character, where it was falt and boring on paper. His performance on the Complete recording is slightly better and less wavery than the later Tenth Anniversary recording. On the latter, he sounds more like he did in Webber's Aspects of Love.

Eponine: Frances Ruffelle (B) is my favourite for the role of Eponine, although not every likes her bluesy-pop interpretation of the part. In anattempt to make the cast on the Complete recording more international, they chose the Japanese edition of Eponine, Kaho Shimada (C). Though a neat idea and great for equal opportunity, the result is an uneven performance from a singer who knew no English and sang everything by rote with a voice coach on hand. Some of her delivery is laughably bad and in other parts she sounds like an 80s pop star. The excerpt below is probably the best and least jarring passages she sings on the recording. Finally, Lea Salonga (T) has the best diction of any singer. Ever. It doesn't help in this role, however, and the harshness of her consonants kills Eponine. She was a great Kim in Miss Saigon, she was fine as Jasmine in Disney's Aladdin, and she was probably great in Disney's Mulan, but she just doesn't cut it as Eponine.

Cosette: People seem to hate Tracy Shayne (C) in this role, but I think she has a very attractive voice. Tracy is one of the few sopranos I've heard with an incredibly high-timbred voice that is also very clear. Judy Kuhn (B) tends to be the normal favourite, but her performance just gets on my nerves and reminds me of a musical saw. Plus, she looks a little goofy and blank when she sings. The fact that Marius could fall in love at first sight with Judy Kuhn makes him seem more shallow. Though not necessarily bad, she would also be a good addition to the Muppet version of the musical.

Dave McGarry has a new batch of songs for download, and they're much more refined than his previous stuff

. The recording quality is top-notch too although there's still a whole lot of E and F# major. It must be a guitarist thing.