I finished watching the fourth season of The Sopranos last night. Though the season as a whole wasn't as brilliant as the first two seasons, it had some of the best episodes to date, and really deserved the 13 Emmy nominations it got this year. The volume was turned down on gratuitous violence, but the plots and subplots felt much more cohesive than the third season.

While I liked parts of the third season, I felt overall that the story arc was too meandering, and too many subplots (like the Russian interior decorator) were abandoned without resolution. If you're a Sopranos fan at all, you won't go wrong by watching this season, especially the great finale.

Joe Pantoliano deserves his supporting Emmy too -- he makes me want to watch Memento again.

Cell phones at the Nobel dinner

Friday:
Watched the movie, Superbad, a comedy in the style of the American Pie movies. It had some really funny moments if your sense of humour is the kind that can navigate past vulgarity and foul language. Carla Gallo from Undeclared (by the same writer) has a brief cameo which is billed in the credits as "Period Blood Girl". 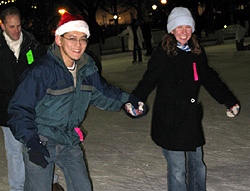 , I wasn't sure how well I'd do on ice skates, especially since all of my physical balance and rhythm comes from my conducting arms, which means that I have no balance or rhyhthm in the rest of my body. Thankfully, I only fell down once, although I did show off the kung fu move, Flailing Windmill, at least four times. 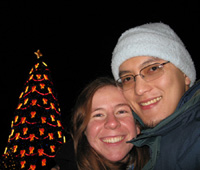 After all the feeling had left my lower legs, we wandered down National Constutition Avenue to see the National Christmas Tree as well as the National Firepit, where they burn up the trees that don't pull in tourists fast enough as well as all the composers that try to arrange Jingle Bells. Tried to sneak into the White House but was turned away by the White House Border Patrol who said that the sidewalk was closed. 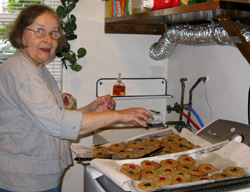 Sunday:
Since the Snowstorm of Death never materialized, we went to the parents' house to participate in the annual cookie-making / tree-decorating ritual during which we, not surprisingly, decorate a tree and make cookies. The paucity of Christmas cookie recipes involving chocolate chips was tragic. Ended the evening with dinner plans at the Capitol City Brewery in Shirlington where I had fish and chips which were nothing more than glorified fish sticks when compared to the Fish and Chips meal at Red Robin.

Sore but still useful in the future

Fugue for Orchestra and Rancour

Wall-E:
The latest Pixar movie tells the store of a solitary robot who cares for the Earth thousands of years in the future, after humans have abandoned it to garbage. He falls in love with a "female" scouting robot and eventually stumbles upon the fate of mankind. Pixar did a great job imbuing the inanimate robots with human qualities, although they're actually MORE interesting before they start speaking English. There are a few live-action humans in the movie, but they're constrained to video tapes and old films, which works well. Because much of the movie has no dialogue, the humour is at a more visually abstract level, which means that kids probably won't enjoy it as much. Overall, as good as you'd expect from Pixar, but not an instant classic.

Michael Clayton:
This movie is about a sleazy "fixer" who quietly solves the problems of his law firm and their important clients. The story employs the Alias technique of opening with a bang and then backing up forty-eight hours, but this only obfuscates the story for the sake of obfuscation, and doesn't really add any twists or turns. It's a little long-winded and may confuse you if you don't give it your full attention, but has a decent ending.

Get Smart:
This is a fun, light-hearted movie starring Steve Carell as Agent Smart. It's refreshing to see a spy comedy which can still be funny without making the lead character a total moron. You also get to see Anne Hathaway recreate Zeta-Jones' laser-beam shimmy scene, and if you prefer dudes, Steve Carell does it too. The movie also sports a few fun cameos, like Bill Murray as the spy who permanently lives inside a tree on the Mall.

New Super Mario Brothers Wii:
Mario and Luigi and the Kingdom of the Crystal Skull is a very safe Mario outing. It's really the DS game from a couple years ago translated for the big screen with a few minor embellishments, so if you liked that, or Super Mario World on the SNES, you'll like this one. The game IS difficult though -- a mix of challenging and frustrating, with very little learning curve. There will be occasions of good old-fashioned controller-throwing, but it never gets so frustrating that you give up altogether.

The only MAJOR problem with the game is the introduction of motion controls: shaking the remote does a spin jump, and tilting it left and right operates special platforms and seesaws. Because you're going to be shaking your controller anyhow as a side effect of playing a challenging platformer, a good number of your deaths will result from the game thinking that you wanted to spin jump at the slightest shake. This is more frustrating than finding a syntax error in PHP, but luckily it's only really noticeable in a few later levels. Nintendo should realize for future games that motion controls are only useful if you're bowling.

Coders at Work by Peter Seibel:
I thought this book would be inspiring, or at least interesting, because reading tech books always gets me into a slightly techier frame of mind. And when skimming through in the bookstore, it looks promising. However, the final product is entirely too long and could easily have been trimmed in half. The author talks to notable and obscure programming personalities, asking the exact same questions to everyone and then dumps the complete interviews into this book. Had it been edited down to a few choice thoughts from each programmer and flowed naturally between topics, I would rave about it. Having to wade through endless paragraphs answering the same ten questions for fifty pages per programmer is way too much. I'm halfway through it, and don't really feel like finishing.

Ender's Shadow:
This book is interesting, because it tells the story already told in Ender's Game from the perspective of another character. This is tricky to do right because you can't reuse the same tensions and mysteries from the original story, and Ender's Shadow definitely works best at the points where the original scenes aren't just replaying. The story succeeds because Bean is a more interesting character than Ender, and the plot ends without the random narrative flailing of "how should I end this book?" that characterized the original.

Arrow to the buttocks reward for prowler 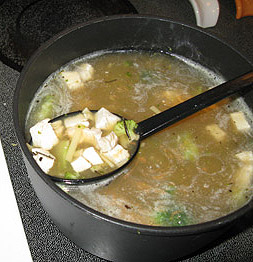 On the spur of the moment last Sunday, I decided to whip up some homemade chicken noodle soup for my tired wife. I didn't start from any known recipe and used only what I had around the house, but just continuously threw things into a pot until I deemed it complete. It was surprisingly delicious, which is why I've tried to recreate the directions here. Enjoy!

"Whatever" voted most irritating word in poll

After burgers at Red Robin on Friday night (where the new Jim Bean Burger was good, but a little too sweet and incorporated cold accoutrement), we took a walk through the Christmas lights at East Juniper Avenue. Visible on the Internet as a prime light spot, it was decent, if not really a destination street for out-of-towners. One house had an animatronic Santa singing rapid-fire Christmas songs while dancing, like a six-year-old with extra sugar.

On Saturday we had brunch at the Original Pancake House with Rebecca's East Moline relatives and then had liberal amounts of cheese soup for dinner. Post-dinner, we went to a housewarming at the new home of Rebecca's yoga instructor, where everyone either did yoga or was married to someone who did.

On Sunday, Rebecca migrated to Maryland for more family time while I stayed home and studied for my Hadoop Certification exam, which I am taking today at 10 AM. We then looked for heartwarming Christmas movies that were free on Amazon Prime, and ended up with Grumpy Old Men after coming up short on the "free" component.

or "How I Stumbled Upon the URI! Zone"


Meanwhile, Google is singlehandedly spoiling the fun by encrypting searches by default... 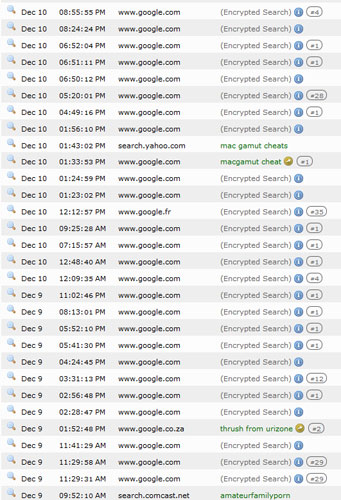 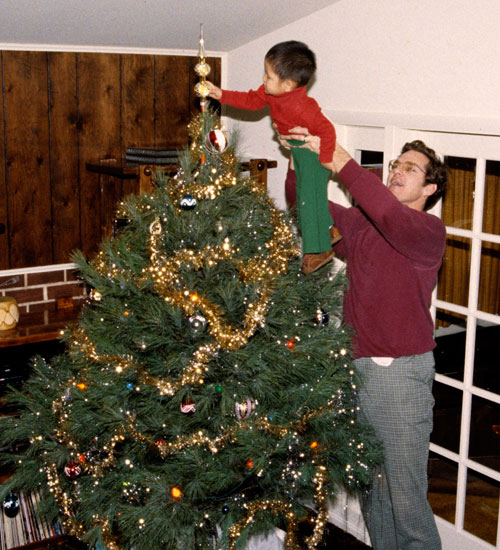 This picture was taken in 1981 at the age of 2. There is a sane amount of ornaments on the tree, because our next-door neighbour had not yet begun her annual tradition of gifting and regifting tacky ornaments in twos. Ten years later, there would be a regular standing argument between my sister and I, who argued that the tree was full, and my mom, who argued that there were still ornaments left in the box. My mom usually won.

Master of None, Season One:
This generally light-hearted comedy by Aziz Ansari is a fun ride with the typical assortment of millenial topics and characters. It looses a little good will in the final episode, which offers no closure and feels more like a pilot than a finale. Still, if you like Aziz's other work and don't mind him occasionally looking like a live-action Muppet, you'll enjoy this show. Free on Netflix.

The Man in the High Castle, Season One:
This Amazon Original is based on the story by Philip K. Dick, and takes place in a United States taken over by German and Japanese forces after World War II. It has a few interesting ideas, but moves glacially slow. The amount of progression in each episode feels stretched to disintegration, and I gave up after five episodes.

Gigabyte GTX 960 Graphics Card:
This is a solid graphics card that has recently slipped down to the under $250 price point. It can maintain a solid 60 - 100 FPS in Elder Scrolls Online without overclocking. The fan is a little noticeable, sometimes sounding like an old beater car trying to go up a hill, but the resulting performance is worth it.

League of Explorers: A Hearthstone Adventure:
League of Explorers ($19.99) is a Hearthstone expansion with a small handful of new cards. It's actually quite fun, although over quickly, and injects a good amount of freshness into tired rounds of fighting Secret Paladins and Face Hunters all day long. I only had to make custom decks for two of the puzzles -- the rest I beat with my regular card decks.

With Christmas approaching, here is a useful guide for estimating when your Amazon packages will arrive, based on Amazon's new interpretation of "Free Two-Day Shipping" and their amazingly efficient Amazon Logistics (AMZL) delivery contractors. 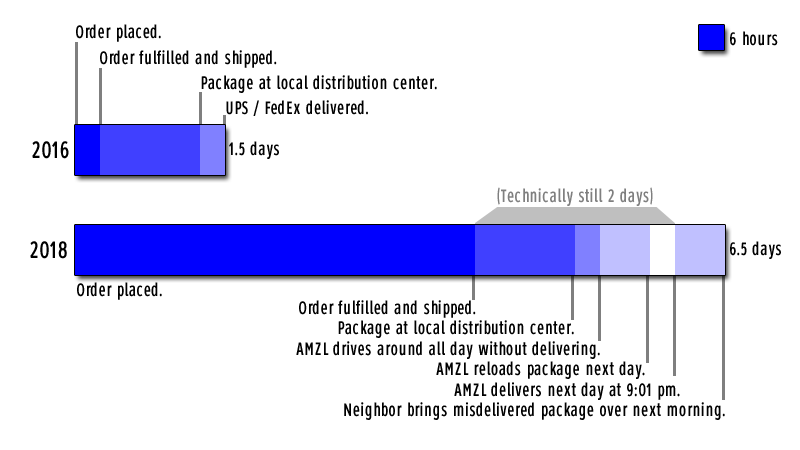 Here are the experiences I gave the highest ratings to in 2021. Go discover something new!