Sibelius' 5th Symphony is such a pleasant work. Everything about it, from the orchestration to the lyric melodies, screams "Let's frolic and pick daisies and be pleasant."

My back has really been hurting these days. It's probably those years of horrible posture catching up with me. If I didn't think I'd get funny looks, I'd bring a seatbelt to class to force myself to sit up straight.

This is a brief update today, simply because I'm hoping to be as productive with my history paper as I was with my pedagogy project.

Thanksgiving Break begins for me tonight, as I have no other classes until next Monday. I don't have any plans other than composing, grading quizzes, and fighting crime. I've started boxing up some books to take home permanently -- the musical ones that look really impressive on the shelf but never actually get opened. I'll probably need to replace some of my legacy computer stuff over break too. My eight-year-old subwoofer which was deaf in one channel finally stopped working at all, and my five-year-old printer charges two sheets of paper to print on the side of one.

There's been a paucity of pictures on the News page recently, so have a cat.

I finished the fourth movement this morning and have decided to post an MP3 of the MIDI for anyone interested in giving a listen. I've got four movements to go, but they're short-ish (about four and a half more minutes). 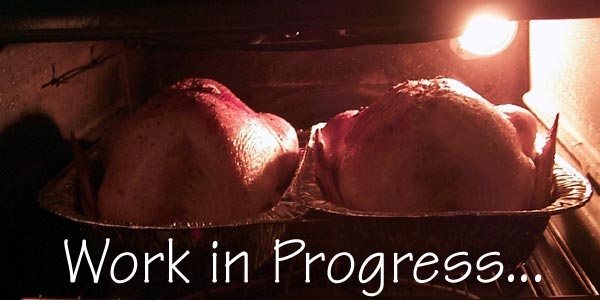 Memory Day: A Day in the Eighth Grade 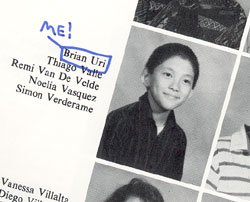 The 1991-92 school year was my Eighth Grade year at Francis Hammond Junior High School. Because it was a junior high school and not a middle school, the top grade was 9, and eighth graders had no particular positive or negative status. This was part of the Alexandria City Public School System's experiment to inappropriately teach kids that "freshman" are at the top of the food chain. (The failed experiment was cancelled after I entered the tenth grade -- subsequent ninth graders were sent to a special ninth-grade-only school to teach them that they were both highly undesirable and incapable of playing well with others). 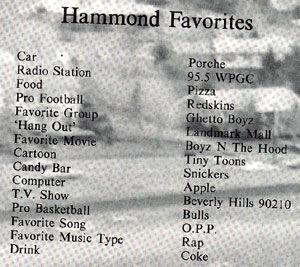 Every yearbook staff tried to take a snapshot of the era by polling students about their favourites, but like all yearbook polls, the sample size consisted of the staff's close friends and no one else. I was obviously not consulted for this list -- other than the fact that I often ate pizza, drank Coke, and lip-synched "Down with O.P.P. (Yeah You Know Me)" at the lunch table every day, I didn't give a rat's ass about anything listed.

My typical school day was eight periods long, including an early bird period that started around 7 AM: 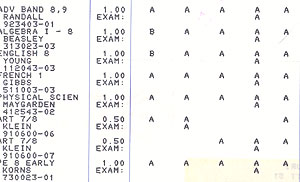 In all these classes, I was more familiarly known by my Indian name, "Curve Breaker". I was always required to attend the yearly award ceremonies to receive yet another mimeographed Outstanding Achievement certificate for my collection, which I ultimately laminated into an Outstanding Achievement backpack until it was set on fire by jealous Underachieving bullies, giving me third degree burns.

Outside of academics, I was also an enthusiastic member in extracurriculars, since eighth grade was the year where you had to start building your college resume before brilliantly spinning out of control on sex and drugs in the eleventh grade and making it all for naught. Besides the band, I played bit roles in the Art Club, where we stayed after school to prefix "F" on all the Art-embossed goods in the storeroom, the Literary Club, where we reviewed really crappy student poetry and chose selections for the literary magazine based on grade-point average and notoriety instead of skill, and Crew, where I worked really hard at being 80 pounds. I was also inducted into the National Junior Honor Society, where the pretentiousness of the students was only outshone by the overdramatic induction ceremony involving real candles and metaphors for extinguishing knowledge.

Lost Songs by Ellie Lawson:
This is Ellie Lawson's second album, which I didn't like as much as Philosophy Tree. It's only downloadable, which makes it quite cheap, and gains BUPoints (which are redeemable for bacon) by being longer than an hour. On the other hand, while all of the songs are "solid", there are no amazing hooks or gems to be found. You can hear samples here. I like tracks 3 and 4, despite the horrible misspelling.

Dollhouse - Season One:
I liked Firefly, but never really cared for Buffy, so I went into Joss Whedon's new show with a fairly unbiased keel, but my keel was hauled fairly quickly. After a slow burn of a story about humans that can be programmed as entire different personalities for rich clients, things are taken to the next level in a manner similar to The 4400. That old show wasn't good because of its "super power of the week" stories -- instead, it unfolded into the social and moral implications of having a society affected by these powers. Dollhouse could have stuck with a "slut of the week" formula fairly easily, but it doesn't actually become a good show until it moves beyond that conceit. The season storyline was satisfying, and the extra unaired episode after the finale managed to be deeply intriguing without stepping on the finale's toes.

At an episode count of 13, this is another show that proves you don't need four hours about Jack's tattoos to be involving.

The Cases that Haunt Us by John Douglas and Mark Olshaker:
I've read and enjoyed Douglas' older books about profiling and serial killers, and picked this one up as a "never would have bought it except that the proceeds go to charity" one-off. In it, John Douglas revisits classic cases like Lizzie Borden, the Zodiac Killer, and the kidnapping of Lindbergh's baby, analyzing each case with modern techniques, and giving his opinion about whether the police of the day got it right.

The book is worth a read right up to the final chapter, on JonBenet Ramsey, which is distractingly marred by Douglas' constant self-endorsement of his profiling. I guess that when you're personally involved in a case, you have to make it clear to avoid bias, but reiterating your credentials and impartiality every second paragraph got old quickly.Final Grade: B-

My One and Only Thrill by Melody Gardot:
Melody Gardot is a jazz vocalist I first heard on XM, and later heard on the plane back from Hawaii. She's got a great mellow timbre to her voice, and (unlike Ingrid Michaelson) actually does a cover of Over the Rainbow that doesn't masticate your eardrums into pulp. Overall, it's great background/dinner music, and I would definitely listen to another one of her albums. You can hear samples here.

The fifty best inventions of 2009 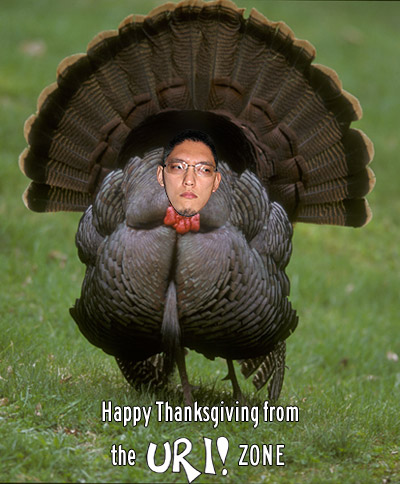 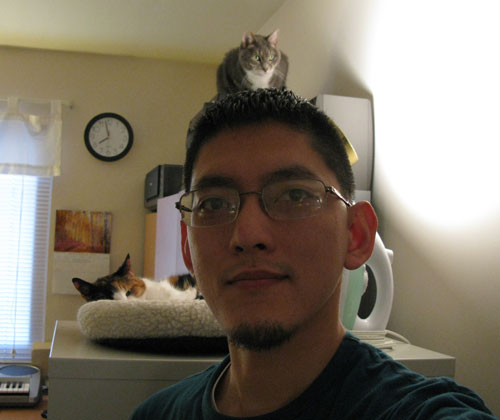 This is what I look like while on vacation.
Tuesday, November 25, 2014 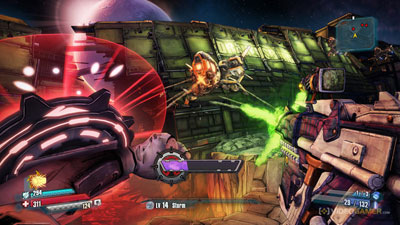 According to Steam, I have 217 hours invested in Borderlands 2, the second longest playtime after Skyrim. Borderlands: The Pre-Sequel is a standalone game made with the BL 2 engine. It's gotten mixed reviews online, although the basic theme seems to be that people who loved BL 2, will also love this one.

The core gameplay of shooting things and getting better guns is intact -- the array of available guns, shields, and mods are similar to the previous game, with new, fun additions that complement well (like laser guns and freezing effects). The biggest shift from the last game is a change in gravity. Since this story takes place on a moon, gravity is greatly reduced and jumps are very floaty.

Floaty jumping gives more freedom in combat, but is particular frustrating in the many jumping puzzles scattered throughout the game. Jupming puzzles weren't fun in Ultima 8, and still aren't fun on the moon. You will often just-miss a long jump, sometimes falling all the way down a tall structure, Super Mario style. Explanations of the new features are poor (especially the new Stingray vehicle which can apparently jump long distances), but can be figured out through trial and error.

BL: TPS retains the biggest flaw I found in BL 2: the world is too vast and empty, with minimal reward for completionist exploration, and far too much backtracking to do all of the quests. The first two hours are incredibly boring, with humour that felt way too forced, and mostly just made me want to play the original game again. Quests are of the "one-off" variety, where the original goal is very simple, but you continue to get sidetracked by unexpected obstacles, to pad the length of the game out.

The game does improve once you pass the tutorial phase, and the characters and skill trees are fun to play. However, I doubt I'll end up replaying this as much as BL 2 after completion. Overall, it's good enough to provide a little more Borderlands action if you really liked the earlier games, but doesn't include enough improvements to stand on its own as a great game -- it would have been a perfect fit for DLC.

Final Grade: C at full price, B in a Steam sale 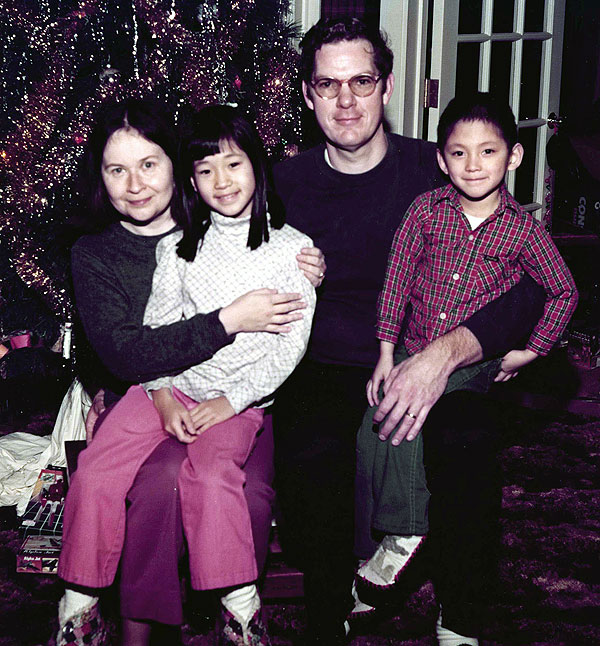 Zooming in on the recently unwrapped presents reveals an "Alpha Jet" model, a Transformer, and a giant box of Construx.

The tree is up! 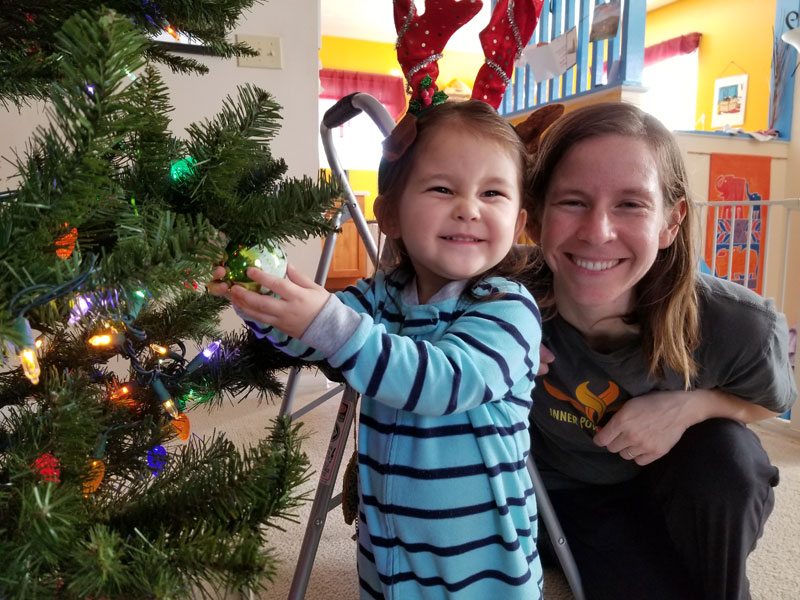 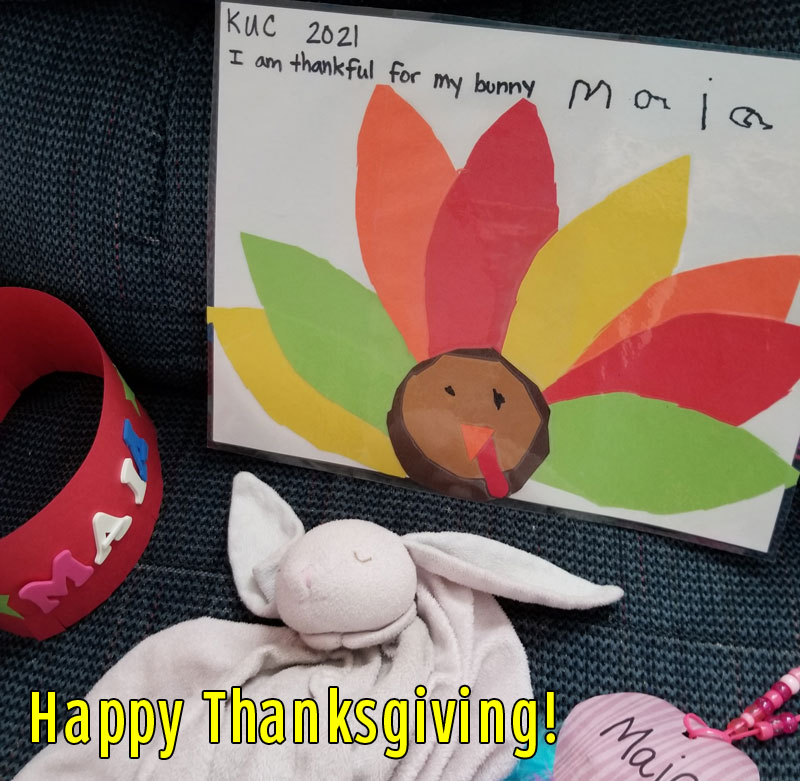