One of my pet peeves is instructors who use the piano to play examples but don't have the proficiency to do it without numerous repeats and mistakes. If the purpose of playing an example is to allow your students to assimilate music through a different sense other than sight, you're doing them no service by giving them a haphazard or improvised performance. Instructors who don't have the ability to play on sight (which there's nothing wrong with at all) should either use recordings, throw up a MIDI, or even practice before class.

I remember a theory instructor from my pre-college years who assigned a short composition to the class. When everyone finished their diatonic wonders the following week, they brought them in, anxious to hear how they sounded for real, with the instructor sight-reading at the piano. What followed probably did not compel many of those budding composers to appreciate their own work.

The Composers' Forum starts up again today for the first time this semester. It's a bi-weekly gathering of composers and interested innocent bystanders where various composers can present their past works. The Forum was new last semester, and so far it's worked out pretty well, drawing some outside music majors as well as the usual contigent of graduate composers. I think it would help to expand the influence of the composition department if we also had class-applied composing classes, and informal round-table looks at works in progress.

"Nothing is more futile than theorizing about music. No doubt there are laws, mathematically strict laws, but these laws are not music; they are only its conditions." - Heinrich Heine

The School of Music here is ramping up to its annual Festival of New Music, and it's going to be a doozy. Following daily two-hour master classes with guest composer, Shulamit Ran, every day this week, there'll be a new music concert tonight. Friday will feature four back-to-back concerts and Saturday will be host to three consecutive concerts and a moderated panel discussion.

I feel that as a contemporary composer, I should be salivating over all this new music goodness in one place, but in reality I'm seeing it as more of a chore than a gift -- maybe it's good that I'll be getting out of the profession when I am. It's not the content of the concerts that bothers me, it's the sheer amount. It's kind of like starting the Roots series but realizing in advance that Chicken George won't be around for another twelve hours or so. I'd rather have non-live versions of the music in the comfort of my home and take the pieces in slowly and at my own convenience.

By the way, our basketball cadre lost to "Happy Hour" on Tuesday night, 60-11. This might seriously affect our endorsement contracts.

Where they get frozen franks from

Be proud of FSU music graduates

The home inspection is taken care of, which checks one more task off the list. There were two major problems in the house, but luckily both were already covered in the original contract. My realtor's submitted an addendum with the specific requests for repair/replacement and the sellers now have two days to reply.

Tomorrow, I'm taking some friends up to see the touring production of Miss Saigon in Wilmington, Delaware. If I had been smarter I would have noticed the Richmond show last October, but at least Delaware isn't too far away. I'll be back late tomorrow night, but there will be no updates until Sunday.

Within twenty-four hours of mentioning Celeste Cheese Pizza-For-One's in my Friday Fragments column last week, I rediscovered them at Sam's Club. Normally, Sam's Club is something of a poor man's Costco -- its only redeeming features are its larger selection of TV DVDs, and the flour-shelled Beef & Cheese Chimichangas in the Frozen Foods aisle. The only reason I was there on Saturday was to pass the twenty minutes until the Best Buy across the street opened up. With a box of Chimichangas under my arm, I happened to glance across the aisle to see the pizzas sold in a bulk box of eight. The box looked just like it did in the eighties, with slightly darker earth tones. When I opened up two boxes for lunch that day, I discovered that the cardboard crisper circle now has an ornate design on the back, giving the impression that you could cut it into a Burger King crown if you so desired.

So, I popped a pizza into the microwave for exactly two minutes and forty-five seconds and then took the pizza (still on top of its box and crisper) to the top of the steps with a Calvin & Hobbes book to relive my yesteryears (Almost eighty percent of meals in my childhood were eaten on the landing in my split-level home, with me sitting on the second step and my food and a book on the top step). It still tasted exactly like I remembered!

Celeste pizzas are never fully cooked -- despite the space-technology crisper circle, the pizza will be crisp on the outside and the middle, but soggy along its inner radius. The cheese stays frozen in tiny pockets of tundracity while other areas of cheesiness melt too much, turning into a dark red rubbery material which some Amazon cultures use in place of honeycomb to repair holes in their skiffs. If you try to cook it any further, the cheese starts to harden and become unappetizing, and then the pizza becomes permanently attached to the crisper circle. The consistency of the pizza is much like the consistency of the crisper -- cardboard with a slightly papery aftertaste. Despite all of this, they still taste pretty darn good, because it's a childhood food, and every food you eat as a child elicits charming memories of wood elves and fairies. On the international pizza scale, I'd say they're still below Totino's but above Ellio's "Our pizzas look like giant rectangular Go Fish cards" pizzas. In the long run I'll stick with Totino's, but who can argue with an 80 cent pizza that takes less time to make than a bowl of soup?

Somewhere in the fuzziness of my memory, I'm recalling an old 80s movie where someone takes a whole Celeste pizza, rolls it up, and eats it like a wrap. I can't remember anymore than that though. Was it the refrigerator sex scene in Hot Shots with Charlie Sheen?

Some people argue that community colleges are unfairly maligned as providers of sub-par educations. This line from my server visitor logs might convince you otherwise... or not. 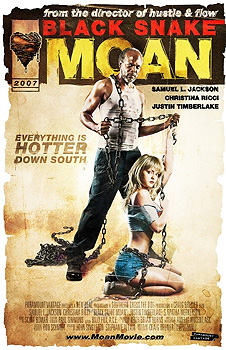 Black Snake Moan, starring Samuel L. Jackson and Jason Chrisley, in theatres near you in February 2007 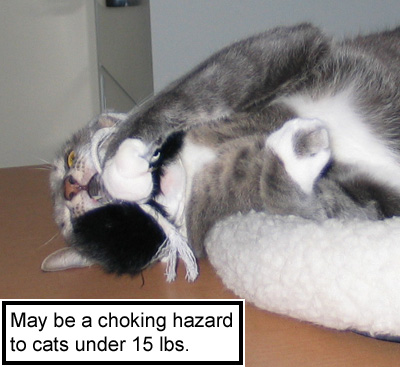 Note the left paw thumb claw -- a sign that it's time for the clippers. 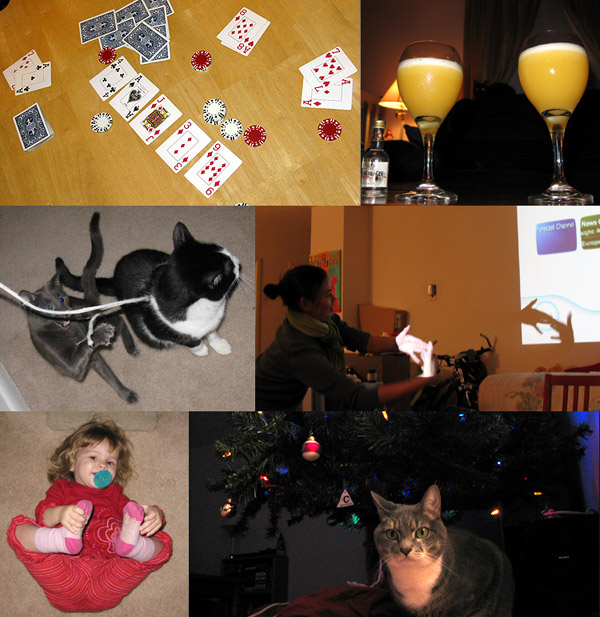 Thanksgiving with the Family


Happy end of January! Only 11 months until Christmas!

Cloned pets: Looks can be deceiving 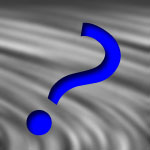 I'm in the midst of weekend work involving the design and implementation of reusable data components, while Rebecca is studying for her first batch of Spring Semester tests, so there wasn't enough material to write a Weekend Wrap-up today.

Ask me about something. Habits, recommendations, trivia, opinions -- anything is fair game. I'll take the most interesting questions that don't involve any revelations of my bank account numbers and answer them later on this week.

On January 30, 1995, I was in the midst of a five-day Band Trip to Disney World (as a junior). We spent this day in Epcot Center, starting with a workshop where we played music from Aladdin like we were a studio orchestra, and then wandered around the park for the rest of the day. I felt that the 3D "Honey, I Shrunk The Kids" ride was the best. After a really awful Polynesian Luau, we returned to the Disney hotel and partied late into the night. Actually, everyone else partied and I took it upon myself to be the chaperone-lookout so no one would get caught. What a nice guy!

On January 30, 1999, I went with Shac and Philip to the movies in Christiansburg. For some reason, we always let Shac pick the movie, and this was the fateful night where he chose The Thin Red Line. We spent the entire movie waffling between walking out or getting our money's worth. All I can remember of this movie now is that there were a ton of poetry voiceovers and slow motion shots of people looking across a field while blinking.

On January 30, 2000, I completed coding on Augmented Fourth, and had just put out a call on the newsgroups (rec.arts.int-fiction) for beta testers. Remember newsgroups?

On January 30, 2001, I turned pages at the music Convocation, and then skipped CS 4634: Design of Information. Instead, Anna and I went out to the New River to walk around a bit before Symphony Band. It must have been unseasonably warm.

On January 30, 2004, my realtor wrote an addendum to the contract for this house, demanding that the old owners replace the heat pump. The home inspection the day before had revealed that it didn't actually work at all.

On January 30, 2011, Kathy and Chris came over for games and pizza while potential townhouse buyers wandered through their old house.

Shouldn't there be a better toothpaste tube by now? It seems to me that the squeezing and dispensing both have room for improvement. - Doobie

The serious answer would probably be that toothpaste is so close to commodity status that there's no money in further improvements to the tube (ever since they introduced the giant "old person" cap in the 90s). This is also why Comet Cleanser cans still release a mushroom cloud of powder when you ever-so-gently set the can on the counter -- they could have fixed that, but everyone's still going to buy the old one, so what's the point?

Should this situation ever change, here are some alternatives that might work. 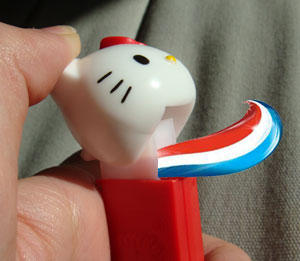 PEZ Dispenser: Pull back the head of your favourite cartoon character and a single serving of toothpaste squirts out onto your toothbrush.

Push Pop: Merge the head of a toothbrush with a push pop dispenser. As you push up, toothpaste flows through the hollow stem of the toothbrush and directly into the bristles.

Chap Stick: A twist-bottom tube of nearly-solid toothpaste (with a texture more like spread butter than squishy poo) can be applied directly to the teeth, and then brushed away.

Rattlesnake Bionics: Alter human genetics to add tiny sacs which generate toothpaste and an abrasive in the roof of your mouth. When you are ready to clean, fire the toothpaste into your mouth and swish it around, like a dishwasher or self-cleaning oven, and then spit. No brushing need! 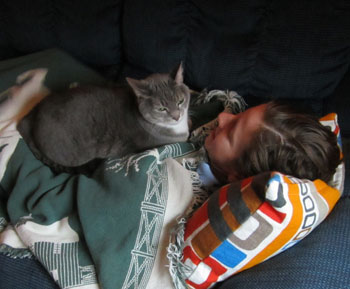 New photos have been added to the Life, 2015 album.

January's Final Grade: B, still busy but Rebecca's feeling better, so we're doing a little more than we did last month! 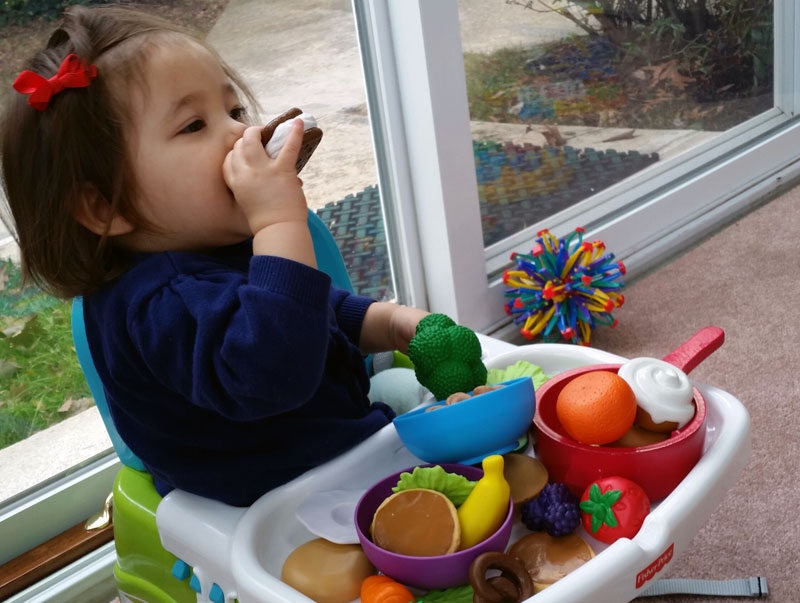 January's Final Grade: B+, Could have been a little warmer, but otherwise nice and relaxing. 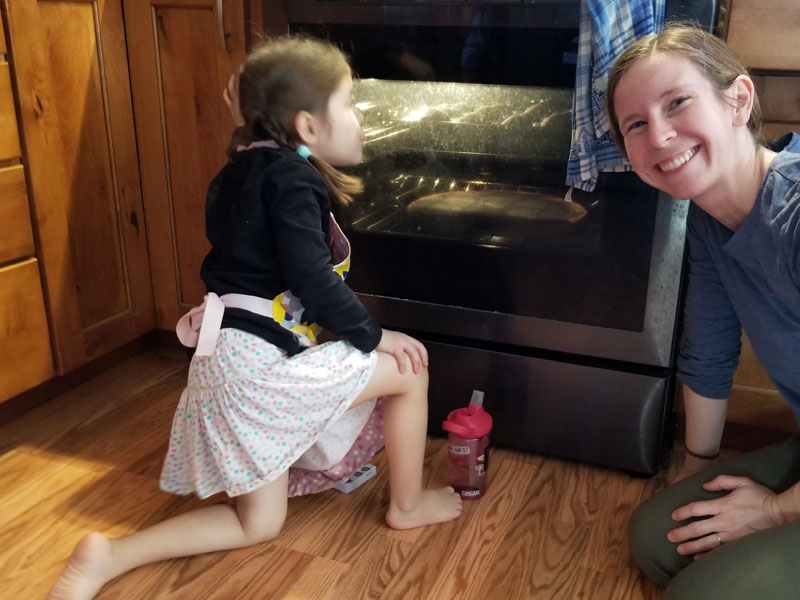