This weekend, we drove up to Pittsburgh, the city of bridges, that functioned as a nice halfway point between us and our Columbus friends, Elisa and Sayak. Pittsburgh is the same distance away as Blacksburg, but infinitely more interesting of a drive.

We stayed at the Priory Hotel, a well-run, pleasant location with a free continental breakfast full of European-style cold meats. The staff was personable and the location convenient, although the immediate vicinity was a little run-down (we were across from a "Giant Eagle" grocery store and a row of abandoned stoops.

After arriving in town on Friday morning, we had lunch at the Modern Cafe and then took a tour of the National Aviary, where a bird ate a grub out of my hand. We then hit the half-priced Andy Warhol museum and had dinner at the Proper Taproom, where we had pizza and a flight of top-notch Pennsylvania beers. 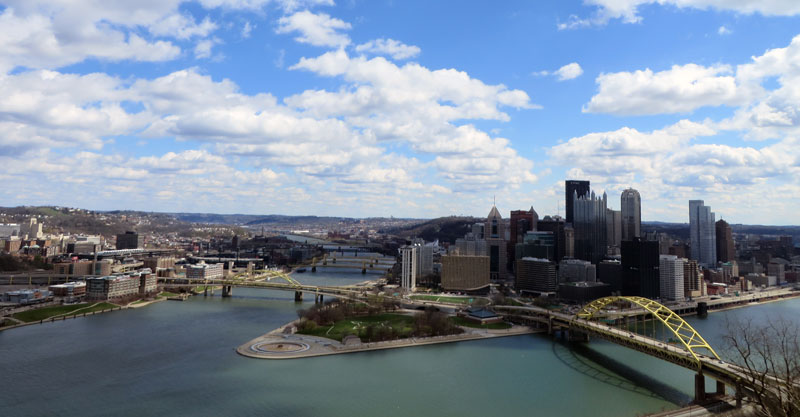 On Saturday, we took a ride up the Duquesne Incline which offered a great view of the city but not much else (allot 15 minutes for it, and not the 3 hours we pre-paid for parking). The weather held stable as we walked the Strip District and ate sandwiches with embedded fries at Primanti Bros, but it got progressively colder and windier as the day went on. After a walk along the Allegheny River, we drove to Church Brew Works for the novelty of tasting beers in a former church. The beers were schizophrenic and forgettable, but the ambience was very cool.

It started raining shortly after, so we spent the evening back at the hotel with delivery food and the World Figure Skating Championship, which (to my untrained observation) just seemed like a bunch of unhappy skaters always about to fall over in time to butchered arrangements of classical music.

We arrived back home around 3 PM to a fecal funhouse. The lesson learned here is that it's okay to leave 2 cats at home for two nights, but with 3, you should probably get someone to stop by and change the litter box.