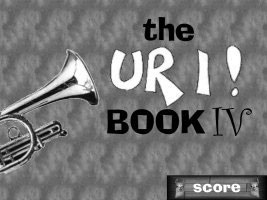 The fourth and final in a series, the URI! Book IV was a collection of mostly original and a few arranged works for the TC Williams High School Pep Band. Although many of these works appeared in earlier editions of the URI! Book, all of them were re-arranged for this edition. Many of the arrangements borrow from the vast library of marching band clichés, and some arrangements were definitely influenced by the arrangements of Dr. James Sochinski for the Marching Virginians. Titles were fairly arbitrary. In most cases, I simply spread the titles across the alphabet, since this makes it easier for performers to remember the off-the-wall names, and makes alphabetizing the book more effective for quick page turns.

Every piece not originally written by me has official permission for arranging purposes by the company/individual who owns the copyright.